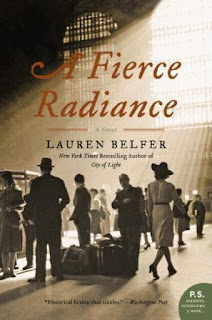 A Fierce Radiance is a richly imagined novel about World War II on the home front. As I read Lauren Belfer's book, I kept thinking of one of my favorite movies, Since You Went Away, a three-hour homage to the wives, daughters, and others who held up the home front during World War II. Claudette Colbert, Jennifer Jones, and Shirley Temple star in the black and white film. Black and white images flooded my mind as I read A Fierce Radiance; the book's main character, Claire Shipley, is a Life magazine photojournalist, and her photo shoots contribute to the realistic portrayal of the time period.The novel begins just after the bombing of Pearl Harbor, and follows Claire as she covers the trials of a new drug-penicillin-that would come to change the lives of many Americans. Most of us take for granted that a simple scratch or infection will not be deadly, but before the discovery of antibiotics, a scratched knee, a blister, or a sore throat could lead to death.

Claire's story on penicillin leads her to encounter love, intrigue,betrayal and murder in this sprawling narrative that combines real and fictionalized events.  A photographer in the mold of Margaret Bourke-White, Claire is divorced, with a young son, Charlie. Her daughter, Emily, perished from an infection that would be easily cured today. Therefore, the penicillin story is personal for her; it becomes even more personal when she begins to fall in love with Dr. Jamie Stanton, a researcher working to develop penicillin at the Rockefeller Institute in New York.

The penicillin story is almost as riveting as the romance between Claire and Jamie, and if you like well-researched historical fiction with plenty of interesting detail, A Fierce Radiance will be your kind of book. The characters walk around New York, especially Greenwich Village; they drink popular drinks from the period. Every detail rings true. The World War II time period seems to have an inherent elegance and romance--maybe it's all those black and white movies, maybe it's the clothes. Claire wears trousers and silk blouses as she goes about her work, and I picture someone like Lauren Bacall, her hair flowing over her shoulders elegantly. As the war heats up, the government takes over the research for penicillin, calling in the big pharmaceuticals (many of which still exist). Penicillin is needed for battlefield infections, and in reality it was developed and widely distributed for just that purpose. Other promising drugs are being investigated and developed at the same time, and this leads A Fierce Radiance into intrigue, and finally murder. And as the war ratchets up, Claire and her fellow Americans worry for their own safety, and for their nation.

A Fierce Radiance is an appealing historical novel with some intriguing plot twists and engaging characters. Claire is tremendously appealing for her bravado and her independent streak, and her job at Life magazine offers a glimpse of both the popular culture of the period, as well as entertaining portraits of Henry Luce and Claire Booth Luce. If you like sweeping narratives and period detail, A Fierce Radiance is probably for you.

Posted by bibliophiliac at 9:00 PM

Now this book is on my wishlist - thank you for reviewing it! :")

Sounds right up my alley. Thanks for the review.

"if you like well-researched historical fiction with plenty of interesting detail, A Fierce Radiance will be your kind of book." Oh yes, this is DEFINITELY my kind of book. I can't wait to get my hands on a copy and dive in!

I just read how the US government forced its people to be vaccinated against smallpox, at Raging Bibliomania. Now it's penicillin and WWII. I am learning a lot about the quest for a cure for diseases today, especially one that has almost become histor

That's what keeps me coming back for your reviews. Seriously magic.

I LOVED "Since You Went Away," with that haunting song that went something like "We strolled the lane together, laughed at the rain together. . ."

I will definitely pick this book up!