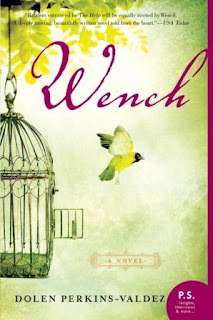 Dolen Perkins-Valdez has the disturbing ability to render pain, cruelty and corruption in exquisitely beautiful prose.  Wench is a novel that places the reader inside the corrupt and cruel world of the slaveholder, while telling the story entirely from the point of view of characters who are enslaved.  The book is set mostly in the Ohio resort of Tawawa, where vacationing Southern plantation owners bring their slave mistresses.

This is a strange world indeed: the surrounding world allows the enslaved women, Lizzie, Sweet, Reenie, and Mawu, glimpses of a freedom they cannot inhabit. Meanwhile, ensconced in a resort, inside a "free" state, the slave women are just as enslaved, performing chores during the day, and the duties of concubines at night.  We first meet the four women during a summer visit in 1852.  We see the varying ways that the women deal with the circumstances of their lives: hatred for the slaveholder; the bonds of motherhood trapping women on the plantation; a vivid desire to escape.  Lizzie, the central character in the narrative, feels her relationship with her owner is different and special. Her owner, whom she calls Drayle, seduced her at a young age, and she has had a favored position in the household, even sleeping in a bedroom across the hall from her master's wife.  Lizzie is convinced that she and Drayle are in a loving, romantic relationship, and her one goal is to convince Drayle to free the two children she has borne him.

Lizzie's closeness to her owner is in contrast to the hatred and contempt that Mawu feels for her owner. Mawu represents a strange and alluring difference; she has a halo of red hair (from her white grandmother) and practices African rites.  Lizzie is drawn to Mawu, but also distrusts her. Mawu's desire for escape frightens and threatens Lizzie, and at one point in the narrative Lizzie betrays Mawu, telling herself it is for Mawu's protection.

Lizzie's self-deception is not easily pierced. Within the cruel system of slaveholding, there is no real love. Because her owner doesn't beat her, has taught her to read, and allows her some freedoms within his household, Lizzie feels her relationship with Drayle is a thing apart. But she is still a slave, and is still in chains, physical and spiritual. Wench allows the reader to see Lizzie's understanding of slavery develop as she sees glimmers of another life: a resort for free African Americans near Tawawa, a dazzling trip into the city, and an abolition pamphlet she reads to the other slaves, then saves for her children.

Wench is written seamlessly and convincingly.  Perkins-Valdez has created strikingly memorable characters:  Phillip, a fellow-slave who shows kindness to Lizzie, Reenie with her straight back and her dark secrets, Sweet with her heartbroken devotion to her children, Mawu with her surprising loyalty, and Glory, the Quaker woman who helps the slave women. Lizzie's two children by Drayle are vivid characters; the son, Nathan, who is both slave and only heir, and the pale, yellow-haired Rabbit, a daughter.  Even Drayle's wife, Fran, has her human side in this book.  Only the male slaveholders are irredeemable, casual in their cruelty and malignant in their abuse of the power they hold over their slaves.

Wench never minimizes the violence and cruelty of slavery, but this novel is more about the inner and outer lives of its characters than it is about the institution of slavery. Wench portrays what Frederick Douglass called "the mental chains of slavery," which could be as powerful as physical chains.  Perkins-Valdez shows how bonds of family love could keep slaves from daring to escape, and she shows how some slaves took the risk anyway.

Mawu and Lizzie are two characters who will bore their way into the reader's heart. Wench is emotionally resonant, morally complex, dreamlike and fascinating. Highly recommended.

A copy of this book was provided as part of TLC Book Tours.

Posted by bibliophiliac at 5:47 PM

I really enjoyed this book as well! What a fascinating setting!

Ooh. This sounds really interesting. It's so rewarding to find a multi-layered book on slavery. I'm definitely adding this to the to-read list. Thanks for the review.

I was just shelving this book the other day when I was struck by its lovely cover. Yours is the first review of it that I"ve seen, so thanks for posting.

I've been eyeballing this one, I'm glad that you enjoyed it. Thanks for the review!

I also enjoyed this book. It was very interesting and made me thinks about aspects of slavery I never considered (or didn't want to consider).

I wasn't aware of the history that is associated with this story - unbelievable, and I think your review is wonderfully thoughtful. I look forward to reading this book even more so now!

@Emily-the cover is beautiful-when I was a bookseller I loved to shelve!
@Melody-I hope you get a chance to read it.

@ManofLaBook--thanks for stopping by--I checked out your review (guess I should leave a comment!)

This book promises to be a good book. Mawu in Ewe - a language spoken by the Ewes in parts of Ghana, Togo and Benin - means God. this is something I would love to read, though the cover would not have attracted me.

@Nana--thanks for sharing that information! I wish I had known that; it did occur to me to do a search for "Mawu" but I never did...

This sounds very interesting. It's gone on my wish list - thanks for bringing it to my attention.

This book looks like a book I will enjoy! Thanks.

Great review. I enjoyed this book as well. The ease and complexity of the relationships kept my interest.

I can't imagine the pain of being that close to freedom and still being so far from it. This book really is beautiful.

This part of history is new to me. I mean, I knew slaveholders had slave mistresses but I didn't realize that this sort of "vacation" society existed. I can't wait to read about it for myself, especially since everyone has great things to say about this book.

Thank for being a part of the tour!

I read this when it first came out and this is the first I've seen of the paperback cover...I love it! Not that the hardcover wasn't beautiful, too, but I love the image of the bird flying free.

After reading your review I amd ABSOLUTELY adding it on to reading list.

This seems to be a fascinating look at a part of history that has been completely overlooked or hushed up.

Loved the review and am going to search for this one out.