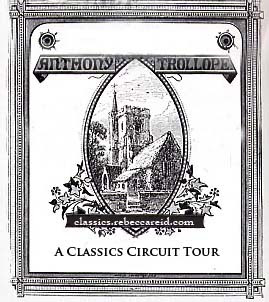 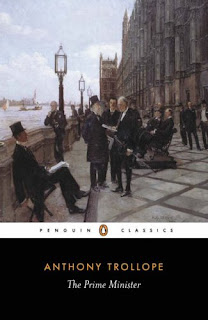 This review of The Prime Minister is part of the Trollope Tour, hosted by The Classics Circuit.

One of the deep pleasures of reading Anthony Trollope (1815-1882) is the complete universe Trollope creates in his series books.  The Barsetshire series focuses on life in a cathedral town, and is known as the "ecclesiastical" series.  The Palliser series is known as Trollope's "political" series.  The Prime Minister was Trollope's thirty-third novel, and was the fifth book in the series of six, beginning in 1864-5 with Can You Forgive Her? and finishing with The Duke's Children in 1879-80.  The Prime Minister was published in parts from November 1875 to June 1876.

There are two main stories in The Prime Minister. One concerns the intrusion of Ferdinand Lopez, an outsider, into London society.  He falls in love with Emily Wharton, daughter of a London barrister, and a member of English squire-archy (Trollope's favorite class of characters).  Emily return's Lopez's affections, but refuses to marry Lopez (or anyone) without the blessing and permission of her doubtful but loving father.  Eventually Lopez marries Emily, and is almost immediately revealed as an adventurer, a speculator, and irredeemably corrupt.  Emily's plight elucidates the thralldom that was marriage in the 1870's.  Although some laws had been changed, there was little that could be done to protect a woman from her own husband. Some of the most enthralling scenes of the novel are those in which Lopez attempts to corrupt his young wife.

In a second storyline, Plantagent Palliser, who became the Duke of Omnium in Phineas Redux, is named Prime Minister of England in a coalition government.  Palliser is Trollope's perfect gentleman:  honest, morally scrupulous, English to his core.  The Duke is married to the energetic and vivacious Lady Glencora; she throws herself into the creation of her own "cabinet" by entertaining on a vast scale.  Where the Duke is thin-skinned, sensitive, and scrupulous, his wife is thick-skinned and resilient.  The political games and maneuverings of government are paralleled by a power struggle between husband and wife.

It is all very entertaining:  the politics, the petty posturing and bickering, the jockeying for position.  Characters from the previous Palliser novels make appearances:  Phineas Finn, who had two full novels to himself (Phineas Finn and Phineas Redux) appears as a trusted adviser to the Prime Minister; the old Duke of St. Bungay; the despicable journalist Quintus Slide makes his usual slanderous appearance.

The theme, a recurring one in Trollope's novels, of the role, manners, and moral duty of a "gentleman" appears in The Prime Minister.  This was a subject on which Trollope wrote often, and the importance of the idea of the gentleman in Trollope cannot be overemphasized.  Another recurring theme, the vulnerability of women in English society, is also important in The Prime Minister.  Trollope's portrayal of Emily Wharton's marriage, and her complete thralldom to an ill-chosen husband, seem like an implicit criticism of the position of women and the institution of marriage.

Another topic creates a troubling question for Trollope's contemporary readers.  How much of his portrayal of Ferdinand Lopez, and the characterization of Lopez as "foreign" and "other" and possibly Jewish reveals the real attitudes of Trollope the writer, and how much reveals the attitudes of Trollope's characters?  Lopez is a troubling character:  certainly his insidious decline into corruption, his attempt to carry his wife with him, and his odious treatment of Emily are some of the darkest and most compelling scenes in the novel.  The Prime Minister is a complex novel, and one that does not easily reveal the answers to these questions:  is Trollope subversive--is he criticizing the English fear of the outsider?  Is Trollope's sympathetic rendition of Emily Wharton's predicament a criticism of the legal position of women?  Certainly Trollope had strong women surrounding him in his wife Rose, and his mother, Fanny, who rescued her family from bankruptcy and privation by becoming a renowned novelist in her own right.

I found The Prime Minister to be compelling and engrossing reading, but I am an admitted Trollope fanatic.  Trollope provides the deepest sort of reading pleasure for this reader:  real narrative drive, complex and entertaining plots, vital and interesting characters, all set in a complex moral universe.  Trollope occupies the reader's mind and imagination, and to my mind there is hardly a better read to be found in English literature.  There may be more wit and sentiment in Miss Austen (by the way, Pride and Prejudice was one of Trollope's favorite novels), but Trollope had the advantage of being able to write knowledgably about the worlds of politics, law, and the church--worlds that were only glimpsed in Miss Austen's novels.

I have a certain affection for Trollope's story, too.  His harrowing treatment at public school, the family's shameful bankruptcy, and Trollope's rise within the British Post Office.  And of course, what could be more charming than the vision of Anthony Trollope, sitting down at 5:30 every morning, to write with his watch in front of him.  He set himself to write 250 words every fifteen minutes for about three hours--after which he would go to work at the Post Office.

I have a vague lifetime goal of reading all forty-seven of Trollope's novels (I'm trying to read them in chronological order, but let's not get crazy).  A secondary goal is to perhaps convert other readers to the joys of Trollope.

If you have not read the other Palliser novels, I don't know that I would begin with The Prime Minister.  Begin with Can You Forgive Her?  If you like that novel, you will enjoy the drama and naughtiness of Lizzie Eustace in The Eustace Diamonds.  Then it is on to Phineas Finn and Phineas Redux.

Much as I loved the Barestshire novels, I now find myself firmly in the Palliser fold, and would recommend the entire series to anyone who wants to spend some time in Victorian England.
Posted by bibliophiliac at 6:01 PM

How is it possible that I have never read any Trollope? I'm pretty sure I'm going to have to remedy that in the coming year.

@Lisa--Trollope gets overlooked, maybe because he is not in most college course curricula, but he is one of the more readable Victorians.

Interesting review. I suspect that you are being a little too forgiving to Trollope on his portrayal of Lopez. He makes anti-semitic comments elsewhere in his canon and I think he was probably prey to the common ingrained anti-semitism that many middle and upper class Britons had at the time.

I want to read the Prime Minister but need to wade through the remaining Barsetshire books and the first Palliser novels before this!

@Falaise--Trollope's views are not always easily distinguishable from his characters' views, and I reserve judgment about the whole issue--I can't decide just how objectionable a reader might find it. But if Trollope were a real anti-Semite, then his portrayal of the character of Daubeny would betray him (the character is widely thought to be based on Benjamin Disraeli, who was of Jewish descent). It is a thorny matter for 21st century readers, for sure.

Thanks for introducing me to another great writer. Your review is interesting and I think with this you would achieve your secondary objective.

Forty-seven books is no mean an achievement. That's awesome. Even with today's computerised writing mode, a lot of writers cannot boast of this.

I'm going to participate in the Victorian Reading Challenge for next year and remedy my lack of Trollope reading. His novels sound very interesting. I think I'll start at the beginning. Thanks for the review!

Have you read The Warden? Did you like it? I'm having trouble getting into it. Since it's the first Trollope I've tried, I was afraid I wouldn't want to pick up anything else. Hopefully, it gets better, but wish I knew before I spent any more time with it.

Thanks for this review. I have never read Trollope but he is on my 2011 reading list. I overlooked the fact of his books being part of a series when I made my list so I may have to do some re-working.

After reading The Eustace Diamonds and Can You Forgive Her, I'm on team Palliser too! It's a bit overwhelming to know where to start (I owned a copy of The Way We Live Now that I still haven't got more than 3 chapters through), but I really love that he writes series, about all these real characters you come to care about, I definitely want to finish the Palliser books now. It's more motivating than trying to read yet another unconnected massive Dickens or George Eliot and having to start all over again with what's going on and who is everyone.

I'm just zipping around the blogosphere, reminding bloggers...If you have read any wonderful literary books
published in 2010, I urge you to nominate your favorites
for The Independent Literary Awards. The awards
include categories of Literary Fiction and Literary Non-Fiction.

I'm especially interested in having some great nominees for nonfiction!

@Nana Fredua-Agyeman--Thanks for stopping by my blog! Trollope's work habits and his prodigious output are inspiring...

@Rummanah--I hope you will love Trollope as much as I do.
@Grad--The slow pace of Trollope's writing does take some getting used to. Particularly in the beginning of his books, when he is delineating character--but I think it is worth persevering! The Warden has one of Trollope's most virtuous characters, Septimus Harding. Maybe you need a little more conflict and bite? The political novels might be more your cup of tea...

@Carolyn--I agree, one of the great pleasures and rewards of the series books is the interconnectedness of the characters, and the way they keep reappearing. Lizzie Eustace pops up again in The Prime Minister!

@everybookandcranny--you could start with Can You Forgive Her...Or with one of the books that is not part of a series. But I think the Palliser books may be Trollope's best--Barsetshire fanatics may disagree...

i love these books. glencora and phinneas finn and dolly longstaff and planty. it is so wonderful and i am so glad you celebrate it here!

I read Rachel Ray for the Circuit--which also has Jewish issues. I never could decide where Trollope himself stood. In the book he shows conflict between the anti-Jewish crowd and the more accepting, and Trollope keeps himself completely on the sidelines.

I just finished Phineas Finn and I'm looking forward to the rest of the series. Although, I thought THE PRIME MINISTER was all about Planty Pall so am surprised to hear about this Lopez person...and eager to keep reading. thanks for this.