The Story on Thursday: The Yellow Wallpaper 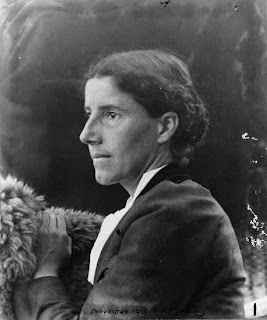 Can we really understand just where women were in 1899, when Charlotte Perkins Gilman wrote "The Yellow Wallpaper"?  Women were disenfranchised and infantalized.  Normal physical processes such as the menstrual cycle, pregnancy and childbirth were pathologized by an almost entirely male-dominated medical profession.  Being a woman was a pathological condition:  women, when they were troublesome or disruptive to the patriarchy, were "hysterical."


This is the context for Charlotte Perkins Gilman's brilliant short story "The Yellow Wallpaper."  Gilman tells the story of a woman who is suffering from postpartum depression and is held as a virtual prisoner by her physician husband.  The tale is told in diary form, written on scraps of wallpaper scraped from the walls of the "nursery" where the narrator is imprisoned.  As the narrator continues to suffer from isolation, inactivity, lack of stimulation, and the patronizing treatment of her husband, she descends into madness.


For many years I suffered from a severe and continuous nervous breakdown tending to melancholia--and beyond.  During about the third year of this trouble I went, in devout faith and some faint stir of hope, to a noted specialist in nervous diseases, the best known in the country.  This wise man put me to bed and applied the rest cure....

Gilman seemed to recover, and was then sent home with instructions to "live as domestic a life as far as possible" to "have but two hours' intellectual life a day," and "never to touch pen, brush, or pencil again as long as I lived."

This was the cure for depression in an intellectually capable writer?  Go home and be domestic--no thinking or writing allowed.


I went home and obeyed those directions for some three months, and came so near the borderline of utter mental ruin that I could see over.

Then using the remnants of intelligence that remained,  and helped by a wise friend, I cast the noted specialist's advice to the winds and went to work again--work, the normal life of every human being; work, in which is joy and growth and service, without which one is a pauper and parasite--ultimately recovering some measure of power.

"The Yellow Wallpaper" is a story that deepens the reader's respect and understanding  with each reading.  A brilliant, capable mind created this carefully crafted story of madness.  Gilman herself struggled with melancholy--we would call it depression.  Her first episode occurred shortly after he first marriage:  one imagines the constraints upon this independent woman were the cause.  Her second episode followed the birth of her child.  Today she would receive real medical treatment, not imprisonment.  Gilman's other work is less well known, but of interest.  She wrote a work of nonfiction, Women and Economics, and a Utopian novel, Herland--an idealistic work well worth the reader's time.

The full text of "The Yellow Wallpaper is easily found online, including here:
http://etext.virginia.edu/toc/modeng/public/GilYell.html

Posted by bibliophiliac at 7:44 AM

Labels: The Story on Thursday The Yellow Wallpaper

I've read this story several times, and it's just as chilling with each re-reading. Not to mention how it leaves me grateful to be a woman now, rather than then.

Wow. I've not heard of this book before but your review has really made me want to read it!

Thank you for this post. Women, young and not so young, often forget the shoulders upon which we stand. I really want to read this one. Thank you, Bibliophiliac. I have good reason to believe your students are very lucky.

This is one of those stories that literally makes me ill -- the claustrophobic pressure! Brilliant piece of fiction and a really frightening reminder of how women were treated. I'm so glad you're lifting it up -- it definitely begs a reread.

A member of my reading group discussed this piece a couple of weeks ago when we read Jennifer Egan's Emerald City: Stories. I ahve yet to read it, suprisingly as I studied feminist anthropology and women's studies in college. Thank you for including a link because I'm really interested in reading it soon.

@Amy-yes, any time I'm tempted to romanticize the past I should pick this story up!
@Sam--you should-it is short and easily available.
@Grad-it is easy to forget how far we have come!

@Audra-claustrophobic pressure is a very good way to describe this story's effect!

@Beth-and I've been meaning to read Jennifer Egan-thanks for reminding me!

This is one of my all-time favorite stories.

@Brenna--one of mine too--I find something new to appreciate each time I read this story...

I have not read this and am kicking myself for missing out on a brilliant read -- thanks for putting this on my radar, now I'm going to have to track this down!

This is the second review of this short story that I've read recently. I really must find a copy!

@Coffee and a Book Chick--yes, track this story down and read it--it is well worth your while!
@Lisa-I think you will be gobsmacked by this story!
@Melu--you are so far ahead of me with your posts on classic short stories! I will come and check out your post...

Going to look up this one next. Eerie... just finished a graphic novel on teenage depression from Tracy White.... eerie...pychic connection again between us girl.

@PK -- I saw that review (nice work!). I think I'm going to have to find that book by Tracy White-it sounded like something I would like.

(This is the Amy from The Lit Quest) I love "The Yellow Wallpaper." If you are interested in intellectual and yet accessible feminist writings, I suggest you pick up Mary Wollstonecraft's Vindication on the Rights of Women. It's very much in line with this story. And even though I don't totally agree with everything she says, I think she was revolutionary for her time period (late 1700s) and a beautiful writer at the same time.

@Amy from Lit Quest--Mary Wollstonecraft is looking at me right now;). She is a fascinating writer with a fascinating life. I read Vindication in grad school, and then went on to read her novels and whatever biographies I could find. There is also at least one novel about her life (Vindication by Frances Sherwood).

I've had this story in my sights for a long time. After reading your review, I am even more eager to read it.

@Stephanie--The Yellow Wallpaper is one of my favorite short stories--and I find more each time I read it...

This is a great short story - one of my favorites. I wasn't aware of Gilman's other works. Thanks for the info!