The Story on Thursday: Isaac Babel 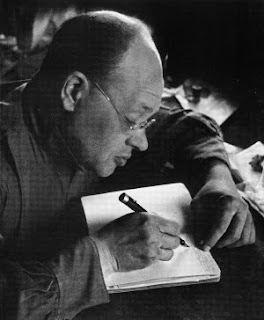 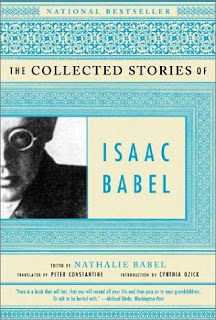 Isaac Babel (1894-1940)
The Collected Stories of Isaac Babel
edited by Nathalie Babel
translated by Peter Constantine
Introduction by Cynthia Ozick
W.W. Norton
Isaac Babel was the son of an Odessa merchant, a Russian Jew whose first stories appeared in 1916.  His most active literary years were from 1921-1927.  Babel's stories fall into three cycles:  "The Odessa Stories," a series of stories about the Jewish gangsters of Odessa; "The Red Cavalry Stories," set in the 1920 campaign of the army of Budyonny, in which Babel took part; and a series of autobiographical stories, which "The Story of My Dovecote" is considered to exemplify.
Cynthia Ozick calls Babel "an acutely conscious Jew" who witnessed a pogrom while still very young.  She says Babel's "final plea was not for himself, but for the power and truth of literature:  'Let me finish my work.'"
The work:  the stories are vivid, muscular, funny, filled with the minute details that deliver shock and recognition.  "The King" introduces the colorful Jewish gangster Benya Krik, a violent yet princely character who outsmarts the local police on his sister's wedding day. The story ends happily for the gangster, his guests, and above all, his sister.  Here is Babel's description of the bride drawing her groom to their chamber:

With both hands she was edging her timid husband toward the door of their nuptial chamber, looking at him lustfully like a cat which, holding a mouse in its jaws, gently probes it with its teeth.

Babel joyously recounts the exploits of colorful gangsters, dressed in chestnut-colored jackets and sky-blue leather boots in the Odessa stories

The Red Cavalry stories tell of the coarsest and darkest brutality, of Cossacks and corpses.  In "The Reserve Cavalry Commander" the sudden appearance of Dyakov, a former circus performer, injects a magical dreamlike quality into a story of desperate peasants and a dying horse.  Like a figure from a fairy tale, Dyakove appears.  "Galloping up to the porch on an Anglo-Arabian steed...red-faced with a gray mustache, a black cape, and wide red Tatar trousers with silver stripes."  Dyaknov is splendid, "deft as if in the circus ring."  He walks up to a dying horse and seems to cast a magic spell on the animal:  "immediately the feeble mare felt bracing power come from this sprightly, gray, blossoming Romeo."  Babel casts a similar spell on the reader, mixing the credible with the incredible to serve up a spell of powerful beauty.

In "First Goose," Babel begins his story with this description of masculine, cruel beauty:


Savitsky, the commander of the Sixth Division, rose when he saw me, and I was taken aback by the beauty of his gigantic body.  He rose--his breeches purple, his crimson cap cocked to the side, his medals pinned to his chest--splitting the hut in two like a banner splitting the sky.  He smelled of perfume and the nauseating coolness of soap.  His long legs looked like two girls wedged to their shoulders in riding boots.

You'll have to read the entire story to find out why "First Goose" is so justly famous.

The last cycle of Babel's stories are the personal stories, of which "The Story of My Dovecote" is the most well-known.  The story is dedicated to Maxim Gorky, Babel's friend and literary mentor.  "The Story of My Dovecote" begins with the narrator's acceptance to the local lycee; he had studied two years to earn one of the two places reserved for Jewish boys in his grade.  Babel relates the elation of the family, the delight the narrator and his mother take in buying pencil boxes and books.  Babel transmits a sense of sensual delight in simple things:  a new pencil box, books, a pair of doves with short, mottled beaks.  The story's climax comes with a sense of the collapse of this world, the sudden intrusion of what is mean, cruel and wrong--a pogrom intrudes on the safety of the young narrator's world, and he suddenly sees the world is "small and ugly."  This is Babel's gift, to get it all into the story--the magnificent star on the chest of a school official, the "hand flecked with leprosy" of a legless man, the bitterness and happiness of tears.

The Collected Stories of Isaac Babel includes an incisive introduction by Cynthia Ozick, an excellent essay by Nathalie Babel, the book's editor and Babel's daughter.  The stories are brilliantly translated by Peter Constantine.

Yet again, you've forced me to add another book to my list. Argh! But this one looks great, too, so oh well! Onto the wish list it goes!!

Alas, another book for my burgeoning list. Excellent review! I love this feature and plan to get back into participating next week. (I'm kind of taking a blog break right now). I hope more people will join in!

Adding it on to must read authors...Isaac Babel... get ready for a place of honour on Aisle B's shelf.

Loved the insight into why I should read this one and sure enough my pocket book is hurting. Husband thanks you for letting me dip into his ;)

@Coffee and a Book Chick--you won't be sorry~
@Stephanie-October seems to have spawned quite a few blog breaks...
@PK--Bless you, and bless your husband's wallet! Isn't it nice to have a husband with a wallet?