The Story on Thursday: You've Got to Read This 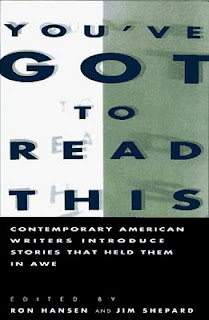 I'm about to commit a book blogger crime.  I'm going to tell you about a book that's out-of-print.  This supports my rationale for buying books right now, when you want them, when they are in front of you.
You've Got to Read This is an anthology that started as a conversation between some writers at the Bread Loaf Conference.  Tim O'Brien and a couple of other regular guys were talking favorite stories, hidden gems.  Out of that conversation came You've Got to Read This:  Contemporary American Writers Introduce Stories That Held Them in Awe, edited by Ron Hansen and Jim Shepard.
I love the concept of this book--contemporary writers (Annie Dillard, John Irving, Tim O'Brien, Eudora Welty, Charles Baxter, and Lorrie Moore among them) each introduce a story that "held them in awe."  Both the introductions and the stories themselves are miniature masterpieces.  Charles Baxter's introduction to "Greatness Strikes Where It Pleases" by Lars Gustafsson is lyrical and moving.  Eudora Welty creates a Chekhovian mood in her introduction to "Gooseberries."
Seeing which stories are chosen by the contemporary writers is like meeting a friend's spouse for the first time--sometimes that person is just what you expected, and other times you're stunned speechless.
My favorites--if I had to choose a few--are the Gustafsson story, a strange piece by James Agee narrated by a cow ("A Mother's Tale"), and John Updike's symphonic, unforgettable "Packed Dirt, Churchgoing, a Dying Cat, a Traded Car."  And Lorrie Moore's introduction to the Updike story is nearly as good as the story itself.
But every time I open this anthology I have a new favorite.  Stories are like that--you can enter into them and then come back, just slightly different, all in the space of an hour.
Do you have a favorite short story anthology?  Got any quirky, out-of-print short story collections hanging around that are hidden treasures?
Addendum:  This topic, coincidentally, fits in with the BBAW topic for today, Undiscovered Treasures, or books that should be more widely known....Arguably, the anthology above has been discovered by someone besides me--used copies start at $56.00 on Amazon.  Maybe it is available elsewhere for less.  I wonder if any other blog readers and writers out there own this book or have come across it?  It does seem like a bit of a mean trick to interest readers in a book they may not be able to find--but it is a good excuse to start haunting used bookstores!
Posted by bibliophiliac at 3:57 AM

Labels: The Story on Thursday

Why is it a book blogger crime to read out of print books?

@Amanda-reading them isn't a crime, but posting about them might be, since the book is probably not easily available....

I love your comparison of contemporary authors recommending stories and meeting a friend's spouse.

This book sound amazing so perhaps I'll do some online searching to see if I can find.

I love the concept behind this book. I wonder whether my library has a copy?

@Red & Stephanie-I feel like these days an out-of-print book is just a challenge waiting to be me--there are so many on-line booksellers now....

I think it's quite acceptable to blog about out of print books- sometimes the hunt for them is a big part of the fun!

@samstillreading-thanks! I do love the challenge of finding an out-of-print book. Maybe "crime" was hyperbole!

I immediately reserved this book from my local library. I think it sounds fantastic and am happy that you chose to "break" the blogger rule :)

I actually have this on my shelf right now! A friend loaned it to me years ago, it got beat up during a move so I replaced her copy and kept the beat-up one. But it's been sitting there for years now, untouched, waiting for me to pick it up again. Thanks for bringing it back to my attention!

You inspired me - I went on Abebooks (great site for used books) and purchased a copy of You've Got to Read This for $3.64 (including shipping). I'm always fascinated to find out what my favorite authors read! Thanks for the recommendation!