Review: The Reapers Are the Angels 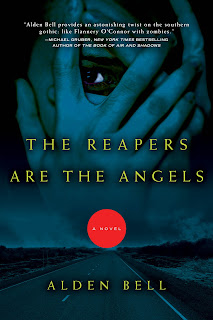 The Angels Are the Reapers is a gorgeously crafted post-apocalyptic zombie tale--written under the influence of Faulkner.  Alden Bell, a pen name for Joshua Gaylord, author of Hummingbirds, has written a novel that eludes categorization.  As a zombie novel, The Angels Are the Reapers evades the expectations of genre.  The unnamed apocalyptic event is neither described or referred to much; the zombies are almost peripheral to the story.  The reader never knows how or why the dead rose from their graves and begin to eat the living.  The zombies, called "slugs" or "meatskins" in the novel, are slow-moving cannibals, all instinct, with no trace of humanity left.  It is an act of mercy to kill them with a blade or a bullet to the brain.  Although society as we know it has been destroyed by the walking undead, most of the structures of cities and towns are left standing, in various states of decay and destruction--with some structures eerily intact.

The novel's female hero is a fifteen-year-old girl named Temple (another homage to Faulkner) who was born ten years after the rise of the undead.  Illiterate and prayerful, Temple is a survivor who wastes no time mourning the past she never knew.  She has regrets, and a certain amount of unearned self-loathing.  She has known loss and beauty, and when left to her own resources she still finds wonder in the world.  Temple carries a finely sharpened knife, and knows how to kill with or without a weapon. Her character is the book's greatest strength.

Early in The Reapers Are the Angels Temple kills a man, setting into motion her journey toward a predestined place.  Along the way are plenty of zombies (or meatskins); the zombies don't seem terribly threatening, being slow-moving and utterly lacking in cognition.  Much scarier are a family of souped-up, decaying, Frankenstein-creature-like Southerners who manage to sound like a branch of the Snopes family.  There is a weird sojourn with another Southern family that seems sprung from the same town as "A Rose for Emily."

The Reapers Are the Angels transcends genre--the writing is almost too powerful, as if a Ford Pinto were given the engine of a Mustang--and the narrative pace keeps surging forward, carried by the very engaging and rounded characters of Temple and her pursuer, Moses.  The zombies seem to function more as metaphor that horrific plot element.  A reader might wonder why, in the world of this novel, the dead are consuming the living, a question the novel never really answers.  A world like this--meatskins stumbling around the streets, much of civilization crumbling, little safety anywhere--might seem like a world unredeemed and unredeemable.  The story of a girl named Temple, and her journey across the ruined America of the future, suggests there is still room for redemption in any world.
Posted by bibliophiliac at 6:00 PM

Labels: Review of The Reapers Are the Angels

What a great review! I love your Ford Pinto metaphor.

Great post! I'm not sure if I would like this one, Zombies are really my thing but it sounds interesting.

I love your blog and am sending you an award. You can pick it up at http://2manybooks2littletime.wordpress.com/2010/10/01/the-versatile-blogger-award/

Hey!! Hope you had a fabulous week! I gave you an award... check out my blog to claim it and pass it on!
Pris
www.scrapartbypris.blogspot.com

The cover is super creepy... gulp... will add on to the list for when I'm brave enough to look at it with the LIGHTS ON for 24 hours straight.

Great review and thanks for bring it into the reading radar.

First of all, thank you for stopping by The Book Frog. I appreciate it.

Secondly, what a gorgeous review this is. I, too, found The Reapers Are the Angels to be a great horror novel which also transcends. Click here if you want to check out my review.

I'm very impressed with your blog!

@Julie-thanks!
@Stephanie-too bad I give away my age with the Ford Pinto reference!
@Jennifer--according to Writer's Digest, zombies are the next big thing!

@PK--the cover really is creepy, and it definitely is a world I wouldn't want to live in!
@Becky--thank you so much! I look forward to being a regular reader of your blog.