The Story on Thursday: Anton Chekhov 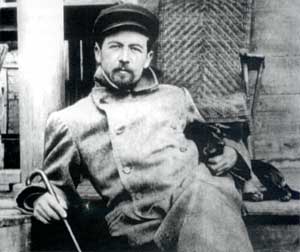 I hope "The Story on Thursday" will be a regular feature (dare I say a "meme"?).  This is my time to talk to the gentlefolk who stop by Bibliophiliac from time to time about short stories--a genre that gets short shrift in the literary world.  I find it curious that in a time of declining attention spans, more people aren't embracing the short story.  There are many fine writers who write exclusively in this form--so if you don't read short stories, out of prejudice or habit--you may be missing out on great works of literature.

Do hardship and suffering create the finest writers?  If so, perhaps we should all be pursuing not happiness, but misery, which is arguably easier to find.  A short history of Chekhov's life reveals great suffering and hardship; out of this came the most beautiful and profound stories ever written in any language.  And Chekhov wrote around five hundred stories, from the comic to the sublime.  Chekhov's grandfather was a serf who worked to buy his own and his family's freedom.  Chekhov's father was strict, rigidly religious, and beat his children unmercifully.  Initially Chekhov's father had some success, opening a grocery in the town of Taganrog; he soon became bankrupt, however, and moved the family to Moscow, leaving behind Anton, who supported the family at age sixteen, working as a tutor.  Chekhov eventually was trained as a doctor; he referred to medicine as his lawful wife and writing as his mistress.  Suffering from tuberculosis, mired in poverty, burdened with the support of his extended family, Chekhov began writing in order to earn money; not until he received encouragement and advice from a well-known Russian writer, D.V. Grigorovich, did Chekhov begin to view himself as an artist whose talent should be nurtured.

If you want to get to the heart of Chekhov, the best of his stories are the later ones.  A few Chekhov stories are so famous as to almost need no mention:  "The Darling," "The Lady with the Dog," "Gooseberries," and "Peasants" are so associated with Chekhov that they spring to mind with his name.  Some of my personal favorites are "The Black Monk," "In the Ravine," "My Life," "A Woman's Kingdom," and "The Duel."

Constance Garnett is the translator of most of Chekhov's stories; more recently Richard Pevear and Larissa Volohonsky have offered newer translations of the work.  If you haven't read Chekhov before and you'd like an excellent one-volume collection, Peasants and Other Stories, published by New York Books Classics is excellent, as are The Essential Tales of Chekhov, edited by Richard Ford, and The Complete Short Novels by Anton Chekhov translated by Richard Pevear and Larissa Volohonsky.  I like the Modern Library three-volume collection edited by Shelby Foote, my favorite being Longer Stories of the Last Decade.

I hope I have convinced some of you short-story-loathers out there to give the story a chance.  If not, I'll try again next Thursday.... 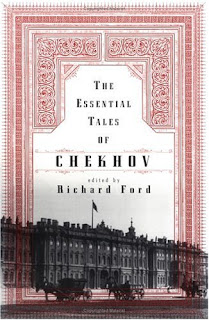 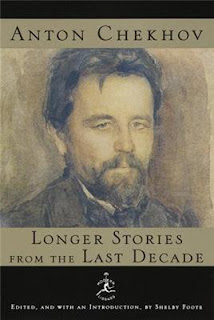 Posted by bibliophiliac at 1:04 PM

You know, I've been trying to come up with some sort of short story meme, but it looks like you've beaten me to it. What you wrote in your first paragraph about how short fiction is under-appreciated is something I've been saying for years. Chekov is an excellent writer to focus on (someday soon I'm going to do one about Joyce). "The Bet" is one of my favorites.
I found this too late to do anything about it for now, but if you keep up the "Story on Thursday" I'll be happy to take part in it. Thanks for doing this.
-Isaac
towerofstories.blogspot.com

I've not read anything of his, but he's on my list!

Isaac-you are most welcome to join me in talking about short stories on Thursdays! If I knew how to make a button I would say "grab my button"! But you could just grab the goofy little graphic I made (I'm strangely proud of it). Let's start a movement!

Lisa-- this is a great idea for a feature!

Not a loather here-- I always enjoy shortstories but don't read them regularly. The most recent I've read wouldn't fall into the literary category. Didn't know anything about Chekhov so appreciate your informative post.

Your post reminds me of a blog I enjoy called Booktryst-- If you enjoy learning about all manner of literary topics, historical and current, check it out.

Now crawling under my desk in embarrassment at never having read any Chekov!

Hey there! Just hopping by! If you have a chance, stop by The Wormhole and check out my 300 follower giveaway! Happy reading – have a great weekend!

Hi Lisa,
I love the idea of a short story meme. I'd be happy to support it as often as I can. A few years back, I talked my book club into making July of each year our annual "Short Story Month" where each member picks a short story for the group to read. It has since become the favorite meeting of many of our members. (I'm sure we can't be the only club that does this, but I haven't heard of any others)

Thank you also for giving some acclaim to the great Chekhov. His story, The Black Monk is definitely in my "top ten" as short stories go.

You mention how misery is perhaps "easier to find" than happiness. I'd agree that that's true, but it is not as easier to seek (at least "on purpose")... :-)