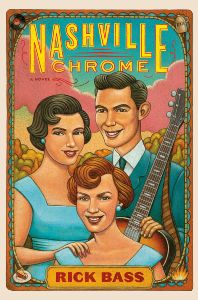 Nashville Chrome by Rick Bass
Houghton Mifflin Harcourt
fiction, 256 pages, $24
ISBN: 9780547317267
publication date 9/14/2010
galley provided by the publisher
Three siblings living in poverty in rural Arkansas are born to sing; they are blessed with a talent so pure that the greatest popular acts of their time try vainly to mimic their sound.  Their harmonies can still a room.  They gather--two girls and a boy--in the midst of the Arkansas woods to listen to a finely sharpened and tempered saw blade, able to detect the single tone of the perfectly sharpened blade.  This seemingly mythical trio are real, and they form the core of a new novel by Rick Bass.
Nashville Chrome is surprising on several levels:  first of all, it's a novel.  Rick Bass is probably one of the finest short story writers working today; he is also known for his nature writing and for his dedication to the conservation of wilderness areas.  So it seems a departure for Bass to publish a novel about a real-life country music phenomenon, The Browns, who have faded from public memory.  The departure is a delight, a vigorous yet lyrical reflection on the strange roots of a family talent, the dark allure of fame, and the puzzling trajectory from fame to disappointment.
The Browns were a musical group who enjoyed a dazzling success in the late fifties and early sixties, intersecting with and influencing Elvis Presley and The Beatles, among others.  As Bass tells it, there was an ethereal, ineffable, and inimitable quality to the harmonies of The Browns, a trio composed of two sisters, Maxine and Bonnie, and their brother, Jim Ed.
This is a book about a calling, about the harmonies and dissonances of family, and about the heartbreaking cost of seeking fame--a journey that pulls The Browns farther and farther from family, from the roots and land that nurtured their talent.  The elusive promise of fame eventually tears Elvis away from the Browns, and then from himself.  The pursuit of fame haunts the older sister, Maxine, long after the group has disappeared from public view.  Maxine, in her old age, is the character at the center of this narrative.  Her longing for something once seemingly promised and never fulfilled doesn't diminish, even as the frailty of her age takes more and more of Maxine's strength.  What at first seems pathetic, over the course of this novel, comes to appear as courage and heart.  While Maxine is by turns childish, jealous, spiteful and foolish, in the end she is strangely admirable.
Nashville Chrome is composed of short, episodic chapters--each chapter has the feel of a stand-alone story, and the poignant twang of a good country song.  The sections set in rural Arkansas capture the beauties of a simple, country life, centered in family and song, undiminished by hardship and poverty.  There is a chapter that recounts a moonlit canoe trip taken by Bonnie and Elvis that is surprisingly sweet.  Bass has captured a sound and an era, once forgotten, in prose that is stunning, restrained, perfectly honed as a sharpened saw blade.
Posted by bibliophiliac at 1:31 PM

this sounds great I enjoy books about music and been a while since I ve read one ,love fact based on true story they sound a bit like,carter family and love there story and connection with jonny cash ,always think this are of america has a rich seam of musical history ,all the best stu

Wow...that sounds fascinating. I will definitely have to look into it.
Alison Can Read

Another great review. I read your list of books not read and I've only read one of them (Of Mice And Men) myself. I have read Half a Life by V.S. Naipaul and his writing was wonderful. A House For Mr. Biswas is on my list of things to read. In fact, I had it checked out of the library but had to return it before I got to it. There's always something one hasn't read!

@stu-at first I wasn't sure The Browns were real, but they are, and still alive. I also love the music of the Carter family and Johnny Cash
@Alison-you should definitely check out Rick Bass at some point!
@Grad-I know! If you think about it the list of unread books will always be astronomical! Plus, I really like to reread, so that makes it worse!