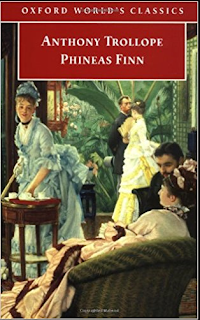 I just spent several days immersed in a world created by Anthony Trollope, a world of Victorian England, of Parliament, Lords, entails, and endless marriage plots. Everything I know about the British Parliament and system of government comes from Victorian novels, mainly Trollope. In Phineas Finn, I re-entered a familiar world, the world of the Palliser novels. It's a place I've been before, and this is the second time I've read Phineas Finn. By now I know the characters well, and I understand the interconnecting web of political, familial, and romantic relationships. In fact, I knew from the start the basic shape of the plot, and most of what was to come (I had forgotten some minor details). I even remember what will come in Trollope's fourth Palliser novel, Phineas Redux.

You might wonder, why? Why read Trollope at all, and why read him more than once?

I've asked myself those same questions. I'm a twenty-first century woman, a feminist I read diversely and I care about social justice. Why then do I enjoy immersing myself in this ancient world of power and privilege? Why am I so beguiled by a bearded Victorian novelist, one who was unquestionably burdened with many of the biases and prejudices of his time?

The only answer I can come up with is that something in Trollope's books answers questions I have about being human and living life. Isn't that funny?

Trollope wrote at a time when women had practically no autonomy, no rights, and little control over the most important decisions of their lives. I mean, I get nauseous when I think about the movement-limiting clothing they had to wear. And, amazingly, Trollope gets that. He clearly feels enormous sympathy toward his female characters (all of whom are, of course, amazingly privileged compared to impoverished women of the time). Despite their lack of power, these women long to do something useful in the world. And if they can't do that, they'd at least like to marry someone who will do useful work in the world.

Glencora Palliser, Alice Vavasor, Violet Effingham, and most of all, Madame Max Goesler: these are women of passion and intelligence. Often they are far more intelligent than their male counterparts.

But that's just a part of Trollope's appeal. His writing is my no means beautiful; it is serviceable most of the time and no more than that. But he creates a vast canvas, an entire social world, and he peoples it with characters who have life and breath. He shows the reader how politics works, why a Parliament man must vote with his party and not his conscience. He brings the reader deep inside the craven and mercenary world of Victorian marriage. And he shows us good old human nature, which hasn't changed very much.

Phineas Finn is a young Irishman who has trained in the law, but through luck and circumstance, ends up getting a seat in Parliament. Phineas is young, inexperienced, and callow. He is a gentleman, but he doesn't have much money (none, really, except for what his father provides). He is exceedingly pleasant, and very handsome (Trollope makes quite a point of this). Throughout the course of Phineas Finn, the hero tries to make his way in the world of politics, and falls in love several times. His actions and behavior are not always admirable, but the way Trollope writes the character, the reader forgives him.

I think we can all relate to the two big questions: what kind of work should I do, and with whom do I want to spend my life (or at least part of it). Finding the right answers to these questions can make the difference between happiness and misery. Trollope shows some of the ways people can find the right answers, and many more of the ways they can find the wrong answers. And he does this in the context of politics and the lives of both privileged and ordinary Victorians--the people of his age.

There are six novels in Trollope's Palliser series. If you are interested in reading and discussing the novels, Audrey at books as food and JoAnn at Lakeside Musing have created #PalliserParty. It's easy and fun--we just read along at roughly the same pace and chat a bit on twitter. The next novel up in the series is The Eustace Diamonds. 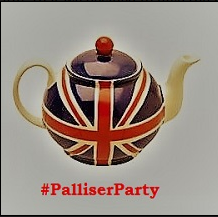 Posted by bibliophiliac at 7:17 PM

You make an excellent case for why a reader ought to consider reading Trollope. I'm so far behind because I've never read him. I understand that lots of people start with the Barsetshire novels. Is that right? (Not sure). I am willing to give him a try, just because so many readers I know and respect have found his novels interesting.
Enjoy!
Judith

What a wonderful post, Lisa! I love Trollope for bringing the Victorian world to life. I love his characters, especially the women. And I especially love that he was so prolific... even if I ever 'run out' of new works, rereading could keep me happy indefinitely. (Especially another visit to Barsershire!) Thank you for reading with us :)

What a great commentary on Trollope's fine novel. I've enjoyed all the Barsetshire novels, but have only dipped into a few of his many other tomes. They all are filled with interesting characters who bring his era alive.