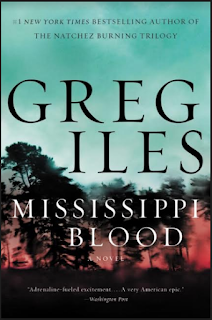 Mississippi Blood is the absolutely stunning conclusion to the Natchez Burning trilogy by Greg Iles. This third novel is far and away the best of the three, and the first two books were superb. Iles manages to create a thriller with courtroom scenes that evoke To Kill a Mockingbird, and action that rivals the very best in the genre. It's rare that a book so immensely readable and compulsively fast-paced also goes so deep in historical significance. In Mississippi Blood, the secrets and mysteries of Penn Cage's family merge with the history of the South in all its bitterness.

The loathsome villain of the trilogy, Snake Knox (whose evil is of Biblical proportions) is at the center of the action in Mississippi Blood. For those who haven't read the first two books (do that post haste) Snake Knox is a member of a unique offshoot of the Ku Klux Klan called the Double Eagles. Snake and his illegitimate son, Alois, haunt the edges of the main action of the novel much of the time. Penn Cage's father, Dr. Tom Cage, has been accused of murder in the death of his former nurse--and former lover--Viola Turner. Back in the 1960's, Dr. Cage and Viola had an intimate affair, once that was illicit both because Cage was married, but also because Cage was white and Viola was black.

Mississippi Blood continues the saga that began with Natchez Burning: unsolved murders dating back to the Civil Rights era, including the murder of Viola's brother Jimmy. The second book in the trilogy, The Bone Tree, solved the crimes committed decades before, and ended with the heroic death of Henry Sexton, a journalist. The novel also ended with the devastating death of Caitlin Masters, Penn Cage's wife-to-be, who was pregnant with the couple's child.

This last novel in the trilogy opens with Penn being shut out by his father as Dr. Cage's trial approaches. Quentin Avery, already a familiar figure to readers from previous novels, has agreed to represent Dr. Cage, but Aver's decisions mystify and worry the son, and both Avery and Dr. Cage refuse to explain. New characters include a young black writer, Serenity Butler, who has come to Natchez to write about the case. She's  beautiful, accomplished, and a former soldier with formidable skills, Together Serenity and Penn try to uncover the facts--and the truth--about Viola Turner's death.

Mississippi Blood is a deeply satisfying conclusion to the Natchez Burning trilogy. This book is more than just a thriller or a courtroom procedural, it is a book about history, the South, and the price the country is still paying for the sins of the past. Highly recommended.

Posted by bibliophiliac at 7:28 PM

I can't believe I haven't started this trilogy yet. Shame on me.

I'm over halfway through NATCHEZ BURNING and I am completely hooked - this is a fabulous series!