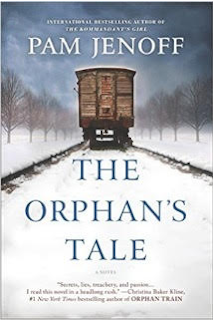 The Orphan's Tale is a haunting story set in Germany and France during World War II. Told in alternating chapters by two characters, Astrid and Noa, The Orphan's Tale is an unusual twist on the World War II historical novel. The story takes place within a traveling circus, and Astrid and Noa are aerialists. Each woman has a secret, and each has an unimaginable strength. Readers will be held in suspense by the questions and mysteries at the heart of this novel, and the tale has some of the mystery and magic of a circus act.

Noa is sixteen and has been sent away by her family after becoming pregnant with the child of a Nazi soldier. She flees from her native Netherlands, and goes to Germany, where she has her baby taken from her after giving birth in a facility for the Lebensborn program. She finds a job as a cleaner in a railroad station in Germany, and a spontaneous act of mercy leads Noa to run again--this time with a Jewish infant she has rescued from a railway car filled with dead and dying Jewish infants.

Noa runs into the forest, terrified and freezing. She is discovered by Peter, a talented clown in the traveling circus. In the circus, Noa and the baby boy she has rescued find shelter.

At the circus, Noa meets Astrid, an aerialist whose Nazi officer husband has divorced her because she is a Jew. The circus is hiding more than one Jew, and there are tensions among the performers. Astrid agrees to train Noa as a aerialist, not really believing the newcomer will make it. The developing relationship between Astrid and Noa, and the dazzling descriptions of Astrid and Noa's act, offer a tense counterpoint to the threat of discovery by the SS.

Pam Jenoff's beautiful descriptions of circus life make this well-researched historical novel haunting and poignant. The inherent danger of a trapeze act, performed high in the air, and depending on timing and trust, works with the shifting narrative perspectives, which blend seamlessly. This story of two women, their secrets, their friendship, and their sacrifices will find an audience among lovers of historical fiction.Especially recommended for readers interested in World War II.

Posted by bibliophiliac at 5:05 PM

I've heard of this book but just assumed it was set in the US. That's bad on my part. This sounds really interesting.

The thought of being a circus performer during the Nazi era is terrifying ... I can't even really image it.