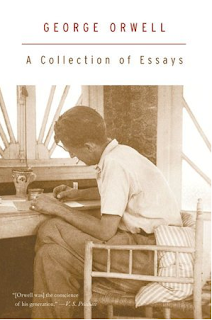 Can Reading Be a Form of Resistance?

The last couple of months I've been reading, thinking, absorbing and processing the results of November's election. But this week was different. After January 20th, I began asking myself what I was going to do. Because I can't just sit back and watch the apocalypse.

Any thinking person who is shaken by the idea that elected officials can present "alternative facts" when they don't like the actual facts needs to read George Orwell's essay "Politics and the English Language." Here are a couple of relevant excerpts:

"In our time, political speech and writing are largely the defense of the indefensible. Things like the continuance of British rule in India, the Russian purges and deportations, the dropping of the atom bombs on Japan, can indeed be defended, but only by arguments which are too brutal for most people to face, and which do not square with the professed aims of political parties. Thus, political language has to consist largely of euphemism, question-begging and sheer cloudy vagueness. Defenseless villages are bombed from the air, the inhabitants driven out into the countryside, the cattle machine-gunned, the huts set on fire with incendiary bullets: this is called pacification."

George Orwell wrote his essay in 1946. It is just as true today. And there's this:


"Political language--and with variations this is true of all political parties, from Conservatives to Anarchists--is designed to make lies sound truthful and murder respectable, and to give an appearance of solidity to pure wind."


We as readers can seek the truth, be careful and scrupulous readers of political language, and be willing to spend the time and effort to cull the real stories, the real truth,behind the obfuscations and lies of politicians and those who serve them. And then we can really resist--on social media, on the streets, and through contacting our elected officials. But first we have to make the effort to be informed and intelligent--and not to be credulous consumers of "fake news" (once known more bluntly as lies).

The Reading Public Wants an Explanation

With the advent of "alternative facts" coming from the White House, readers across in the United States and Great Britain are looking for answers, and they are turning to books. As has been widely reported, George Orwell's 1984 is now a bestseller, along with Aldous Huxley's Brave New World and Ray Bradbury's Fahrenheit 451. Clearly, the reading public believes we are moving toward a dystopian, dangerous future. The Sinclair Lewis novel It Can't Happen Here is sold out on Amazon, as is Hannah Arendt's Origins of Totalitarianism.

If reading dystopian fiction makes you feel better (or worse), or if it is just what you're doing to cope or process, I'd recommend Octavia Butler's prescient Parable of the Sower and Parable of the Talents. And if you're thinking about climate change and the environmental impact of an administration seemingly hostile to science, I'd recommend Jeff Vandermeer's Southern Reach Trilogy, starting with Annihilation.

And I haven't even touched on the catastrophic, devastating policies of this administration for public education. But I think that requires a whole separate post.

Tell me, how do you resist?

Posted by bibliophiliac at 4:04 PM

I'm teaching children the importance of reading widely and carefully. We all must do our part.

This month I've been badgering and plaguing New York State legislators to increase state library funding to all libraries, both in New York City and state-wide. This is a crucial issue for all New Yorkers--for citizens, immigrants, refugees, and, of course, children, though they may be citizens as well, of course. I see on a weekly basis how the libraries in northern New York help people find jobs, pay taxes, make a healthy meal, provide lots of space for families to play and read with their children.

But there is so much more to do. I abhore Trump and every single thing he has done and that he stands for. It's time for me to talk to my Republican congresswoman and her staff on a weekly basis, as a friend of mine does. Our two Democratic senators are already doing plenty, but they need support.

I'm thinking of getting like-minded friends together to discuss these issues, asking each friend to bring a friend, with my mind on what can we do??? A lot of us are well over 60 (and 70), and don't really have the strength to travel to DC to protest and keep ourselves healthy at the same time. But I'm sure there's a lot we can do.

As Ken my husband has said, we should protest in Glens Falls, (a small city an hour to the south of us.)

@DebNance--Yes, I do that too!

@Judith-Yes, I think we need to do all of the above. We need to do what we can do, whatever that might be. Even my 84-year-old mother is thinking of getting on a bus and demonstrating!

Unfortunately I wasn't able to make it to the Woman's march we had in my town but I have been signing petitions and trying to be as informed as possible. I hate to see what is happening and I want to learn how to do more!

@Iliana-Learning and becoming informed are definitely key. I have to say, sometimes I just feel paralyzed. And then I look around me and feel a sense of panic. It's hard to know where to start....

I definitely am feeling all of the #readandresist urges, and am using the hashtag occasionally on twitter - the current state of the world has got me back into blogging when I didn't think anything would, so that is something! Up in Canada it feels a little bit removed but also not - what happens in the US affects us tremendously here. Tomorrow is a protest and I will be there!

@amckiereads-Good for you! I admire you for taking part!