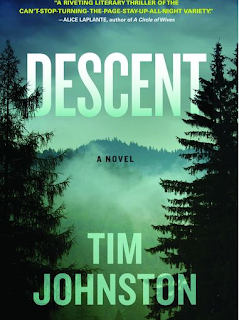 Descent is every hyperbolic adjective a book reviewer ever fell back on: riveting, compelling, enthralling, achingly lyrical. I'm almost at a loss for words to explain why I think this book is so good and why you should read it--but I'll try.

Tim Johnston takes a situation and a premise that is naturally compelling: the Courtlands, an ordinary family from Wisconsin, are visiting the mountains of Colorado in one last family vacation before oldest daughter Caitlyn heads off to college. Caitlyn, a gifted runner, goes off with her younger brother Sean in the early morning hours to explore the mountain roads and paths: Caitlyn is running, and Sean is riding a mountain bike. While their parents are back at the hotel room, a sinister stranger in a jeep runs over Sean, injuring him severely. He then persuades Caitlyn, against her instincts, to get into his jeep to go for help. It is as if she disappeared into thin air.

What makes Descent more than just a thriller (although it is thrilling) is all that makes literary fiction literary. Johnston creates a sense of place that is artful, and adds so many layers of meaning to this beautifully crafted novel. He captures the beauty, the danger, and the isolation of the mountain landscape. And his plot turns not just on the mystery and absence of Caitlyn's disappearance, but also the fissures that develop into chasms within the family that is left behind.

Angela and Grant Courtland are trying to rebuild a damaged marriage when their daughter disappears. The distance that opens between them after their daughter's kidnapping is both geographic and emotional. Grant gives up his contracting business and moves to the Colorado mountains to continue the search--even after three years pass, he is no closer to healing, closure, or acceptance. Angela goes back home to Wisconsin with Sean, who never fully recovers from the injury to his knee and leg. Eventually he becomes a restless nomad, haunted by guilt and anger.

There is absolutely nothing predictable in the resolution to this book. Caitlyn, while victimized, never becomes a victim. She's one of my favorite characters in this layered and subtle book: she is fierce, smart, and totally believable. Johnston achieves something really special in Descent: he creates a page-turner that is also a sensitive meditation on families, chance, and fate.

Posted by bibliophiliac at 6:52 PM

Riveting and unpredictable? You've got my attention.

I love thrillers and this one seems to be a good one to keep in mind. Great review!

Can I just say how happy I am to know that I'm not alone in sometimes not being able to explain why I love a book, especially in a way that doesn't roll out all of the old standby phrases? It seems much easier to explain why I don't like a book than why I love one. But telling me that this one has the things that make literary fiction literary is exactly the way to convince me to read a book!