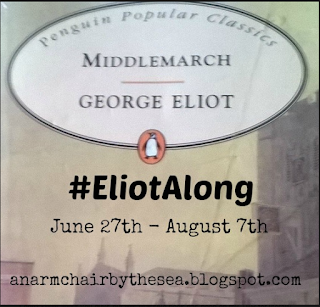 This is week three of the Middlemarch readalong hosted by Bex of An Armchair by the Sea.

This week's chapters follow several distinct narrative subplots:  the relationship of Rosamund Vincy and Tertius Lydgate; the final illness of Mr. Peter Featherstone; and the character of Mr. Casaubon (Eliot goes very deep) and the marriage of Dorothea and Mr. Casaubon.

Rosamund is an interesting creature: I think Eliot uses her as a foil to Dorothea, both to show the dangers of the kind of shallow education that focuses on a girl's manners, beauty, and "accomplishments" (meaning embroidery, singing, and playing the piano) to the exclusion of any kind of moral foundation or intellectual learning.

Rosamund reminds me of a darling kitten with sharpened claws. She is entirely cunning and selfish, and she relies on manipulation and emotional trickery and deceit to get what she wants. Lydgate is manipulated into proposing marriage, even though he doesn't have an adequate income, and Rosamund cares nothing for his profession or his goals.

The dominant theme here seems to be the ways in which people deceive each other and themselves. Casaubon is a very dark character, so much darker than the reader could have ever guessed. He cares nothing at all for Dorothea--he only seems to see her as an extension of himself, or a tool for getting the admiration and respect he thinks he deserves. But Casaubon secretly knows his life task has been mostly a dusty waste of effort. His greatest fear is that people will find out. He is singularly focused on avoiding his own awareness or recognition that he is not the great man he would like to be, and somehow salvaging his reputation in the world. If he has to bury Dorothea alive in a dark library for the rest of her living days, he doesn't care: he seems to think he can somehow enjoy fame and control his wife's life even after death.

Peter Featherstone is another character who doesn't seem to recognize how little post-mortem joy there will be in torturing his family from beyond the grave. He is a small, mean, avaricious man, and Mary Garth is much better to him than he deserves.

Dorothea, of course, is better than anyone in the novel (sometimes annoyingly so), and better to virtually everyone than they deserve, especially Mr. Casaubon. Her overly sacrificial, overly pious attitude has grated on me. But this is a novel where the majority of the characters try to seem good when they really are not good, they are hiding some kind of private vice or sin. Dorothea has the virtue of actually being good, and wanting to do good, even when her actions don't always have the desired consequence. Here's a passage I love from chapter 39--it's a little long, but worth coming back to. Casaubon has been weakened by illness, and Will and Dorothea meet by accident at her uncle's house:


"....I should like not to have so much more than my share without doing anything for others. But I have a belief of my own, and it comforts me."

"What is that?" said Will, rather jealous of the belief.

"That by desiring what is perfectly good, even when we don't quite know what it is and cannot do what we would, we are part of the divine power against evil -- widening the skirts of light and making the struggle with darkness narrower."

"Please not to call it by any name," said Dorothea, putting out her hands entreatingly. "You will say it is Persian, or something else geographical. It is my life. I have found it out, and cannot part with it. I have always been finding out my religion since I was a little girl. I used to pray so much -- now I hardly ever pray. I try not to have desires merely for myself, because they may not be good for others, and I have too much already. I only told you, that you might know quite well how my days go at Lowick."

"God bless you for telling me!" said Will, ardently and rather wondering at himself. They were looking at each other like two fond children who were talking confidentially of birds.  (391-392)

This passage is so lovely! I think it captures Dorothea's innocence and her essential goodness. And that thought--that she tries not to have desires merely for herself, because they may not be good for others--I love that! Most of the secondary characters in Middlemarch cause harm to others through selfish desires that overwhelm any natural desire to do good. And don't you just love that last sentence, about Dorothea and Will being like two fond children talking confidentially of birds? That's one of my favorite sentences in the novel.

So: Middlemarch is a great novel, a panoramic novel, and  it is filled with a never-ending richness. Almost everything you can dream of or imagine about human character and human behavior is in this novel. Seen from the outside, the characters are as ordinary as anyone you might meet in your daily life; inside, each character is fighting wars. I love it.

I hope other Middlemarch #EliotAlong readers will comment. I'm so anxious to hear the thoughts of other readers.

Posted by bibliophiliac at 12:01 PM

Thanks, a great post about what happened in Middlemarch this week! I also enjoyed the sarcastic note to the reader at the end of chapter 35, where Eliot excuses her upcoming discussion of 'low people'. Eliot notes that the delicate reader may take the descriptions of low people and their actions as a parable if they like...
Lauren @ltulip

@Lauren-Oh, we're all low people! I loved that little narrative joke too!