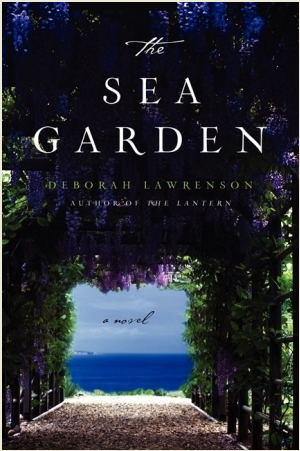 The Sea Garden is an atmospheric novel composed of three sections, each telling a separate story. "The Sea Garden", the first section, is set in 2013 and begins with a garden designer, Ellie Brooke, arriving on a Mediterranean island off of the French Coast. The second section, "The Lavender Field", takes the reader to the village of Cereste in Provence during World War II, where the French are living under Occupation. And the third section, "A Shadow Life", centers on World War II in London and France. Each section focuses mostly on the character of a young woman: in "The Sea Garden" it is Ellie Brooke; in "The Lavender Field" it is Marthe Lincel, a blind woman who has found work blending scents for Distillerie Musset; in the last section, it is Iris Nightingale, a British woman working for a secret government spy organization called F Section. It is Iris's love affair with a mysterious French spy called Xavier that links the three stories together, although it isn't until the very end of the novel that the connections become clear.

The tone of the first section of The Sea Garden is quite different from the following two sections, and the reader must be patient, because initially this different mood and atmosphere doesn't make much sense. Ellie Brooke arrives at the Mediterranean island of Porquerolles to meet with a prospective client, Laurent de Fayols, owner of an estate called The Domaine. Even before Ellie arrives on the island, a disturbing incident sets a Gothic and mysterious mood amid the sunlit beauty of her surroundings. On the voyage to the island, Ellie witnesses a distressing and seemingly inexplicable death. And Ellie already has her moments of darkness: after two years, she is still grieving the death of her boyfriend, a military doctor killed in Afghanistan.

Lawrenson displays one of her strengths as a writer in this first section: she is gifted at evoking the beauty of the island landscape, and describing the lush gardens that Ellie has been hired to restore. But Lawrenson also develops a sense of mystery, and an almost Gothic feeling of foreboding and darkness beneath the brilliant sunlight. Laurent de Fayols seems like a likely prospect as a client, although his imagination may be a bit untamed. But Madame de Fayols, Laurent's elderly mother, is sinister and possibly demented. And Ellie keeps glimpsing a stranger who is both mysterious and elusive--as well as extremely attractive.

The mood Lawrenson creates in the "The Sea Garden" reminded me strongly of Wilkie Collins: a sort of Gothic mood of mystery, coupled with psychological insights and and isolated location. The next two sections, "The Lavender Field" and "A Shadow Life" are substantially different in mood. Both of the later sections of the novel focus on the activities of the French Resistance. Lawrenson moves around in time--sometimes going backward, and other times moving forward--all to great effect. In fact, time is one of the themes of this novel, and to fully grasp the story, the reader has to journey through both time and space. A quote from the first section, when Madame de Fayols is interrogating Ellie about her plans for the garden, hints at what the author's intentions are:


You seem young. You do realize that to create a garden is to work with tie, don't you? .....Those who make gardens to last must understand the past and see into the future.


To understand the mystery of Xavier, a French Resistance fighter, spy, and possible double-agent, the reader must go back and forth in time--and even then, the mystery ends on a note of ambiguity. For this reader, the sections that really were gripping and engrossing were "The Lavender Field" and "A Shadow Life." In "The Lavender Field," Lawrenson brings to life the dangers and sacrifices that ordinary people endured as fighters in the French Resistance. Marthe, a blind woman who is thrilled to find work in the soap factory and perfume distillery of Victor Musset, finds herself drawn into the Resistance--at the risk of her own life and the lives of others. In "A Shadow Life," in London, Iris Nightingale works in a secret agency, preparing spies (male and female) to travel to France to work with the French Resistance. She meets and falls in love with a handsome, charming spy known by the code name Xavier, and spends the rest of her life wondering who he really was, and what happened to him. Lawrenson doesn't definitively answer every question raised in her novel, but ends with a note of ambiguity.

The Sea Garden is lushly written, and blends elements of mystery, romance, and history to create a very engrossing story. I would recommend this novel  for those interested in World War II, especially stories of the French Resistance. My favorite character in the book was definitely Iris, but all of the characters of the Resistance fighters were compelling. I was fully caught up in The Sea Garden, and loved the way Lawrenson wove her three narratives together. Lawrenson is a skillful storyteller who writes a lush and painterly prose. The Sea Garden draws the reader into a thrilling tale that is hard to put down. The narrative structure is clever and original, and for those who enjoy some ambiguity in a book, leaves the reader thinking about the novel long after the book is closed.


Deborah Lawrenson's facebook page and her blog have some beautiful photographs of the Porquerolles.
More information about the author and her books is available at her web site.

Posted by bibliophiliac at 9:32 AM

This sounds like a book I could get lost in. Fabulous review!

I've kind of gotten burned out on the books that incorporate different time periods but it sounds like this one makes it work.

This sounds like my kind of book - interconnected stories, WWII, and lush writing. I'm glad you enjoyed it!

Thanks for being a part of the tour. I'm featuring your review on TLC's Facebook page today.

One I have noted down. Hope I can find it though.

@Lisa-This reminded me just a little of The Secret Keeper, which also incorporates two different time periods. I did like the WWII setting very much.

@Mystica-i hope you are able to get this book--and that you enjoy it!