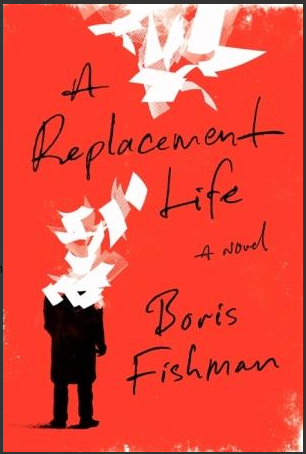 A Replacement Life
Boris Fishman
hardcover, 336 pages
Harper
a review copy of this book was provided through TLC Book Tours

Boris Fishman's debut novel is set in Manhattan and Brooklyn, but it has one foot in Minsk.

Slava Gelman is a junior staff member at a fancy New York magazine, clearly modeled after the New Yorker. He has distanced himself from his Jewish Russian family in order to hone an American voice in his writing. But as one of his colleagues astutely notes, the magazine (called Century in the novel) has a style and a voice, and it is not Slava's.

When Slava's grandmother dies unexpectedly, he finds himself drawn inexorably back to his immigrant past, and the world of his family. He's also thrown back together with Vera, whose family emigrated from Minsk with Slava's, and who was Slava's childhood playmate.

As Jews in Soviet Russia, the Gelman's were never religious. But Slava's grandmother was a Holocaust survivor, and, as Slava discovers, would have been eligible for restitution from the German government had she not died just as the funds became available, Slava's grandfather, Yevgeny, persuades Slava to write the grandmother's story, making it Yevgeny's, and apply (fraudulently) for restitution. Soon Yevgeny is contacting all the families he knows in Brooklyn, and Slava has found his calling as a writer--writing fictionalized accounts as a "curator of suffering" for false Holocaust restitution claims.

Slava goes back and forth between two worlds--the bland and cultured world of Century magazine, where he can't write a story in the magazine style, and the colorful Brooklyn of his childhood. The voice of the novel, and the energy of the novel, all come from the humor, the irony, and the painful history of Russian Jews.

A Replacement Life has literary quotes and allusions scattered throughout its pages. I don't think I've seen this before in a novel, but Fishman provides notes for each of his quotes or allusions (the references range from Mary Oliver to Bernard Malamud to Dostoyevsky). This painstaking and scrupulous tactic stands in contrast to Fishman's character Slava, who weaves fact and fiction together in his narratives, whether for Century, or for his restitution narratives. Slava has just as much trouble parsing fact and fiction in his relationship with Arianna (a fact-checker for Century) and his friendships with his clients (Slava and one of his forgery clients lie seamlessly to a Rabbi on the steps of a synagogue).

I couldn't help liking Slava and all of his relatives. Yevgeny, who is the kind of person who finds a way to get what is needed, whether in Soviet Russia or in Brooklyn, is a wonderful creation, as are all of the characters, right down to the Russian cabdriver who is always ten minutes away.

A Replacement Life is nearly impossible to summarize. This is a novel that will make the reader think about identity, family, and where truth really resides. Propelled along by irony and humor, A Replacement Life will stay with the reader long after its pages are closed.

Boris Fishman has an excellent website with links to more reviews, as well as more about the author here:
http://borisfishman.com

Posted by bibliophiliac at 3:28 PM

I'm placing this novel on my list immediately! I'm so grateful that you've posted an entry about it. In the very early 1980s, I taught for one year in a school where one-quarter of the students were recent arrivals from the Soviet Union. I spoke some Russian, became friendly with a couple of the families, and am fascinated, all because of that experience.
Thanks,
Judith (Reader in the Wilderness)

@Judith-I'm so glad my review was helpful! You will have a special appreciation of this book...

I'm so glad you enjoyed this book! Thanks for being on the tour. I'm featuring your review on TLC's Facebook page today.