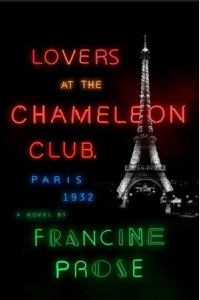 Lovers at the Chameleon Club, Paris 1932
Francine Prose
Harper, 448 pages
a review copy of this book was provided through TLC Book Tours

Lovers at the Chameleon Club, Paris 1932 is a bewitching historical novel with shifting points of view, chameleon-like characters and narrators, and a compelling, if disturbing, historical figure at its center. There is no single truth in Francine Prose's fictional world; in fact, there are multiple truths, and the reader is left to decide which to believe.

The novel has as its triggering subject a photograph by Brassai, which Francine Prose saw at an exhibition. The real historical Brassai photograph, "Lesbian Couple at Le Monocle, 1932", features a tuxedo-clad woman, holding a slender woman wearing an evening gown. The woman in the suit was Violette Morris, a French race-car driver, athlete, and eventually, Nazi collaborator.

Prose bases her character, Lou Villars, on Morris. Her exploration of a woman who excels at athletics, wears men's suits, and undergoes an elective double mastectomy in order to fit more easily behind the wheel of a race-car, is entrancing. Prose convincingly captures a world of nightclubs and artists, cross-dressing performers and corrupt police. Her characters include a Hungarian photographer, his language-tutor girlfriend, and a Baron and Baroness who own an automobile factory. The narrative voices include a French Lycee instructor writing a biography of Villars, the unpublished memoir of a heroine of the French Resistance, letters from the photographer to his parents, and more.

Lovers at the Chameleon Club is an expansive story, beginning with Lou Villars childhood, and spanning the French Occupation, post-war France, and even the old age of some of the characters. Prose handles the multiple narrative strands smoothly--so smoothly that the reader may not question whose truth is the real truth until near the end of the novel.

Lou Villars is not an entirely unsympathetic character, but her weaknesses become disturbing when she becomes drawn into the Nazi network, eventually attending the 1936 Olympics and meeting Adolph Hitler. This outsider and outcast becomes powerful, manipulative, and dangerous when she becomes a Gestapo spy and interrogator.

Lou falls in love twice in the course of the novel, but her lovers inevitably let her down, and she finds every attempt at romance and love thwarted. Could her experiences as a social and sexual outcast have influenced her attraction to the powerful myths and prejudices of the Nazis? Or was she simply evil?

In fact, there is quite a bit of thwarted love in Lovers at the Chameleon Club, Paris 1932. Lionel Maine, an American novelist, loses his great love to the talented photographer, Gabor. Gabor's girlfriend poses on wet pavement for her boyfriend, emulating a corpse, then suffers  paroxyms  of jealousy toward Gabor's wealthy patroness, the Baroness. But romance is secondary after the German invasion, and a good bit of the novel is devoted to the intrigue of the Resistance movement.

Lovers at the Chameleon Club is both a rip-roaring tale of Paris in the twenties and thirties, and an exploration of truth and the mystery of evil. Although it took me longer than usual to work my way through this novel, I enjoyed being lost in the world that Prose depicts so beautifully.

Posted by bibliophiliac at 7:39 PM

Paris in the 20s and 30s? I'm in! Really though, this looks really good, and different. Need to get myself a copy!

I think I'd enjoy getting lost in this world as well.