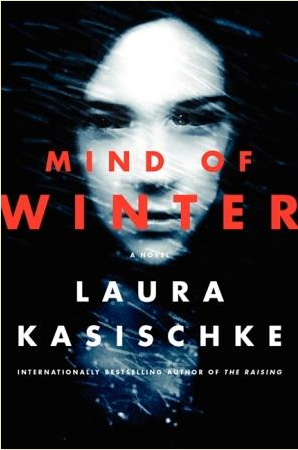 Here's my advice for reading Laura Kasischke's novel Mind of Winter: clear some time, about a day should do it. Turn on all the lights in the house. Now start. Don't worry, you won't put this book down until you finish.

Here are a few things about this book that I think are pure genius:


Ah, Laura Kasischke, you are blowing my mind with your writerly awesomeness.

The novel takes place on Christmas day, in the present day. Holly Judge, a married mother of one teenage daughter, wakes up with one thought: "Something followed us home from Russia." Holly and her husband Eric Clare are the adoptive parents of Tatiana, who spent the first nineteen months of her life in a Russian orphanage. Throughout the day, Holly keeps thinking back to the Christmas Day, thirteen years ago, when she and Eric first visited the orphanage and met Tatiana. One of Holly's big regrets is having forgotten to bring Christmas gifts for Tatiana and the orphanage staff on that first visit. Holly has many regrets, in fact, and now that Tatiana is a teenager, Holly seems to be second-guessing every step of her parenting from even before the adoption.

Holly had to adopt, because while she was still in her twenties, she had her ovaries and breasts surgically removed. The surgery allowed Holly to escape her fate: death at an early age, perhaps as young as thirty. Holly's mother and sisters weren't as fortunate. Holly's mother died of cancer, one sister killed herself, and another sister died of the same cancer that killed the mother. A brother and father are also dead, so Holly clings tenaciously to her beautiful daughter, a "jet-black Rapunzel" whom Holly and Eric rescued from an orphanage. The Siberian orphanage where Tatiana spent the first nineteen months of her life is evoked in disturbing flashbacks.

The novel opens the morning of Christmas Day. Holly and Eric have overslept, as has Tatiana. Eric jumps up and leaves to house to get his parents from the airport, as Holly tries to both get ready for company and cope with her suddenly difficult teenage daughter. All day long the tension between mother and daughter builds inside the house, as snow falls steadily outside. After a while it becomes clear that the snowstorm is a blizzard, and that no one will be coming to dinner. There won't be any guests to eat the roast or the vegan salad. And Holly swings back and forth between clinging to her daughter and scolding her, while Tatiana seems at one moment a sweet and innocent girl, and a the next a cold and angry teen.

Kasischke turns up the tension expertly, and the flashbacks to the orphanage are truly chilling. Actually, much of Mind of Winter is chilling, and the tension builds delightfully. This is the kind of book that will have you swatting away anyone who dares to talk to you while you are reading.

Although Kasischke drops clues throughout the novel, the twist at the end of Mind of Winter is not anything you will have seen coming, trust me. This book is brilliant.

Posted by bibliophiliac at 2:41 AM

Writerly awesomeness! We could all use a bit of that. I've been hearing some good stuff about this book and now after reading your review I know it has to go on my TBR list :D

I have this one on my wishlist and hope to be able to get it soon! What a wonderful review you wrote of it. Thanks for sharing this with us.

@Jennifer-at the rate you read, you could finish this in a day! I love the fact that I was still thinking about this book days after reading it.

@Rita-Thanks for your comments! I hope you get to read Mind of Winter soon!

"Turn on all the lights in the house" This is a VITAL step - you do NOT want to be reading this book in the dark!

@Heather-Seriously, all the lights must be on!