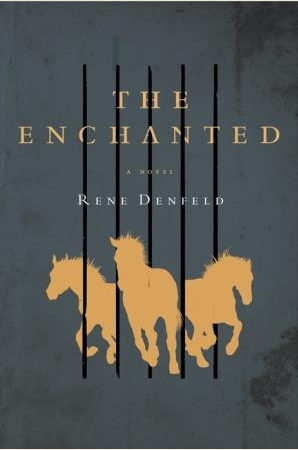 The Enchanted
Rene Denfeld
hardcover, 256 pages
Harper
a review copy of this book was provided through TLC Book Tours

The Enchanted is a novel filled with wondrous language and fantastic imagery of golden horses stampeding deep beneath a stone building. It is also a novel set in a prison and narrated by a mute death row prisoner whose crime is so horrendous that it is literally unspeakable.

Rene Denfeld has created a magical world in The Enchanted. Her novel melds horror, fantasy, and romance in a unique blend that flows seamlessly from start to finish. The story begins deep in the dungeon of a prison. A prisoner named Arden, who has not spoken in years and finds his only solace in books from the prison library and his vivid fantasy life, begins this way: "This is an enchanted place. Others don't see it but I do." From his death row cell, Arden tells of a fallen priest, a lady who is an investigator working on behalf of death row inmates, and an inmate named York who is ready to die.

As the lady (she is never named in the narrative) digs into the childhood and past of York, she uncovers a heartbreaking and familiar story that is not unlike her own. And the reader gets a glimpse of how a boy becomes a monster.

The crimes of the prisoners are not detailed, but a reader can fill in the gaps. What Denfeld does in The Enchanted is to reveal the false wall that exists between good people and those deemed monsters--and she does this without excusing or ignoring the brutality of the prisoners, even as she shows the brutality and corruption of some who are supposed to be on the right side of the law.

The Enchanted might not appeal to every reader; the novel relies upon fantasy and gorgeous writing, and shifts back and forth between Arden's powerful fantasies and the bleak reality of unwanted children who are repeatedly harmed until they are damaged beyond repair. I read The Enchanted in two days, and for me it was a magical book, one that created its own world of words. Despite the sometimes harsh and sad events of the story, the writing itself was so beautiful that it lifted the narrative to some other plane.

What Denfeld's book does more than anything is to portray every character in her novel with relentless compassion, so let the reader see each character as human--broken, but human.

The narrator, who "did a bad thing," and then later, "another bad thing," loses and finds himself in books. Here's a lovely passage about that:


The library became my sanctuary. I loved the ways the precious stories took shape but always had room to be read again. I became fascinated with how writers did that. How did they make a story feel so complete and yet open-ended? It was like painting a picture that changed each time you looked at it.

The Enchanted is a book I would come back to again. Recommended for readers who love beautiful prose and tolerate ambiguity.

Posted by bibliophiliac at 6:18 PM

"relentless compassion" is a great phrase - I can't wait to meet these characters and see them through the author's words.