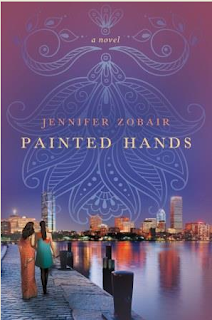 Painted Hands is an engrossing tale of friendship, love and work, with a cultural perspective that makes this novel a fascinating read. I was riveted by this book, and read it straight through in just over a day.

Amra, Zainab and Rukan have been friends since their college days at Smith; they are smart, high-achieving women in their late twenties facing the typical conflicts and questions about love and work. They also happen to be Muslim-American. Painted Hands is set in Boston, First time novelist Jennifer Zobair captures the stressed, hectic lives of her high-flying characters perfectly. Zainab Mir has a job working for an outspoken female Republican Senate candidate, whose candor keeps Zainab busy working the spin cycle. Amra Abbas is a lawyer, a Columbia Law School grad trying to make partner in a high-powered law firm. And Rukan is contemplating marriage to a non-Muslim, a choice that surprises even non-traditional Zainab.

Zobair examines the typical conflicts and crises of women in their late twenties: the search for love, the trade-off between love and career, the conflict between the wishes of the older generation and the desires of the young. But the context of the Muslim-American community gives Painted Hands a richness of texture and a depth that adds to the pleasures of the novel. I was completely absorbed by the inside look at the lives of these characters. Each woman in Painted Hands negotiates the boundaries of tradition and religion in slightly different ways. Zainab is the least traditional of the characters; she shocks some segments of the Muslim community by appearing in glossy magazines wearing an evening gown, and she has nothing but scorn for the traditional separation of the sexes for worship. Zobair's love life is complicated too; a purposefully single feminist, she becomes involved with the most unlikely man: Charles Holland, a right-wing radio shock-jock. Amra's romance is not quite arranged, but almost. She falls for Mateen, a handsome and slightly older Muslim man her mother has pretty much hand-picked for her. But her fairy-tale love affair involves subterfuge as she tries to hide from Mateen the workaholic commitment she has to her career.

There are a couple of interesting subplots: Amra's work friend, Hayden, is drawn to a religion that seems to offer an alternative to a self-destructive emotional cycle in which she is caught. And a terrorist attack in Boston creates an incendiary situation for Zainab.

The "painted hands" of the title refers to the traditional henna designs painted on a bride-to-be's palms. The three friends in the novel hide messages (wishes) in the intricate patterns on their palms, and it turns out to be a lovely metaphor for the hidden wishes and dreams in the intricate designs of the characters' lives. Painted Hands reminded me a bit of Thrity Umrigar's The World We Found in its treatment of female friendship, religion, and politics. Highly recommended for readers who enjoy stories of female friendship and love with a political and multicultural dimension.

Jennifer Zobair has a well-designed and informative website at http://www.jenniferzobair.com

Posted by bibliophiliac at 7:13 PM

I enjoyed this title too and was surprised/thrilled that it actually held depth. I'm glad the author addressed important issues of progression and what does it exactly entail in the Muslim community.

Thank you so much for this lovely review! And now I'm anxious to read The World We Found.

All my best,
Jennifer

@Rummanah-I agree, this is a really well-written book that offers so much to the reader on so many levels. I loved the complexity of the discussion of religion and politics, and the characters (especially Zainab and Amra) were engaging and alive.

@Jennifer-I will look forward to reading your work again. I think you will like Umrigar! Another multicultural title to add to your list....

Sounds like a fascinating look at friendship between these three people and the challenges they face.