Review: The Fountain of St. James Court or Portrait of the Artist as an Old Woman 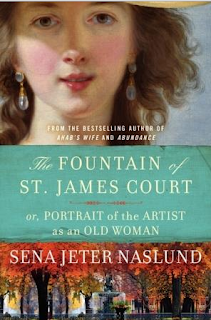 The Fountain of St. James Court or, Portrait of the Artist as an Old Woman
Sena Jeter Naslund
William Morrow
hardcover, 448 pages
a review copy of this book was provided by the publisher through TLC Book Tours

I found it very difficult to fully engage with the world of The Fountain of St. James Court. The opening chapters of Sena Jeter Naslund's latest novel really frustrated me as a reader--I felt the rhythm (a sort of start-stop-start) was an obstacle, and I was stuck inside the head of a woman whose thoughts didn't interest me that much. Yes, I was frustrated, and many readers would have put the book down. Having read the entire novel (the whole title is a doozy: The Fountain of St. James Court or, Portrait of the Artist as an Old Woman), I'm glad I persevered.

Naslund's novel is structurally complex and smartly designed. The contemporary story, told stream-of-consciousness style, is one day in the life of Kathryn ("Ryn") Callaghan. Ryn has just completed her novel, a historical fiction based on the actual life of painter Elisabeth Vigee-Le Brun, a French artist who painted Marie Antionette and survived the French Revolution. The Fountain of St. James Court is a novel-within-a-novel: Ryn's novel about Vigee-Le Brun is interwoven with the story of Ryn's day.This sounds complicated, and it is but it works better than you might expect. Naslund interweaves Vigee-Le Brun's painterly insights, and her story of becoming a renowned and highly sought-after portrait artist, with the writerly insights of Ryn.

The slowest part of the novel for me was the beginning. Ryn has just finished her novel; it is after midnight, and she takes her manuscript, fresh from the printer, and walks across St. James Court (the novel is set in Louisville, Kentucky) to leave the newly minted novel at the doorstep of her friend Leslie. This action seems to take place in slow motion, and almost soured the novel for me because it felt so static and artificial. Nothing really happens--a woman walks across a courtyard in a ritzy neighborhood where well-off people have the leisure to contemplate every blade of grass. Did I mention that this is told stream-of-consciousness style?

But it gets better, much, much better.

The stream-of-consciousness style, the story encompassing one day, is obviously an homage to Virginia Woolf's Mrs. Dalloway, and this novel abounds with literary references (there's a character named Daisy, surely a nod to Daisy Buchanan of The Great Gatsby, who was from Louisville). The title, of course, alludes to James Joyce's Portrait of the Artist as a Young Man.

The old woman in the title is Vigee-Le Brun, who lived well into her eighties. But it could almost be a reference to Ryn, and her friend Leslie. Ryn is still spry and fit, but she is in her seventh decade. The Fountain of St. James Court is most assuredly a women's book, not for only women, but celebratory of women. Kathryn has been married and divorced three times, her friend Leslie married and divorced twice. Kathryn has one beloved child, a grown son named Humphrey, happily married to another man and living far away in Sweden. Vigee-Le Brun, like her mother before her, married, not altogether happily. In the end the happiness of each woman is found in motherhood, and in the case of Vigee-Le Brun, in work. The fountain at the center of this novel has a statue of Venus rising from the water on a half-shell, and that image is central to the novel.

The chapters about Vigee-Le Brun were more immediately engaging, and Naslund brilliantly captures the eye and vision of the artist. The artist's life seems more invigorating, more filled with conflict and danger, and more vital. But the character of Kathryn did grow on me. Her stream-of-consciousness thoughts began to seem more playful and engaging as the book went on. Kathryn's day is not without its moments of heartache and even danger, although her life of privilege initially seems as safe as a cocoon.

What worked in The Fountain of St. James Court was: the beauty of the language, the vision of the artist (both artists in the novel, and the creator); the incredibly intricate and gorgeous pattern of imagery and motif, and the characters. For readers well versed in literature, history, and art, there are allusions and references scattered throughout the novel. For anyone interested in art, French history, or the period of the French Revolution, the historical aspect of the novel will delight.

I think the first few chapters of The Fountain of St. James Court will test the patience of some readers. Others will find the stream-of-consciousness style difficult. Readers who have enjoyed other novels by Naslund, or Virginia Woolf fans, will probably enjoy this novel. Some readers may find, as I did, that in the end The Fountain of St. James Court offers a deeply satisfying reading experience.

Posted by bibliophiliac at 7:19 PM

Wow! I don't know whether to hurry out and get a copy or to avoid it like the plague. So many things about it sound intriguing. So many other things sound daunting! I'll be thinking of this one for sure :) Great review!

@Jennifer-I guess that's what you call a mixed review! I ended up liking the book very much, and it is just the book for some readers. But not every reader will love the point of view of Kathryn. I'm recommending it, but with some reservations (not plague level)!

Sounds like this book will be a great fit for the right reader.

Thanks for sharing your thoughts on this one for the tour.