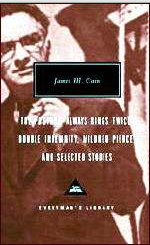 This is my last review of 2012, and my last review for the Back to the Classics 2012 Challenge. While I didn't successfully complete this challenge, I did complete more than half of the categories, so I count this as a partially successful challenge. The Postman Always Rings Twice counts for the Mystery/Horror/Crime Fiction category.

I had never read anything by James M. Cain, and he has been on my TBR list for a long, long time. Cain's work is in the hard-boiled crime tradition, and there is little question from the beginning of this novel that a crime will take place. The narrator, a drifter named Frank Chambers, finds himself at a roadside sandwich joint, the Twin Oaks Tavern, owned by Nick Papadakis. The gullible and good-natured owner offers Chambers a job, and Chambers accepts. What draws Chambers in is not so much the promise of a paying job, but the wildcat allure of the owner's wife, Cora. Chambers and Cora swiftly become involved, and in no time at all they are plotting the murder of Papadakis.

Cain's writing is stylistically gorgeous, lucid and taut. He moves the narrative along swiftly, with splendidly economical yet expressive prose. By the end of the novel, the amoral and unlikable murderers have somehow become, if not sympathetic, at least fascinating and maybe pathetic. There is something inevitable, atavistic, and feline about the character of Cora. My favorite scene in the novel is the one in which Frank and Cora go to the beach and nearly drown themselves in the ocean waves. At that moment the couple seem fatalistically caught up in their own natures, and the scene is powerful. I will definitely read more of Cain's work, if only to try to see what makes his work so stylistically singular.

The edition I read was from an Everyman's Library collection that includes two other novels, as well of some of Cain's best stories. The introduction by Robert Polito is extremely helpful in giving the reader an understanding of Cain's work, and I'm glad I read it before reading the novel. Normally I don't read introductions until after I read a novel, but in this case I think the introduction was exceptionally well-written and informative.

Sarah has already announced that she will host a Back to the Classics 2013 Challenge at Sarah Reads Too Much, and I will definitely participate. Even though I didn't complete the challenge this year, I enjoyed participating and read a handful of really good books for the challenge. 2012 was a good reading year for me, and I read more classics this year than in past years (more than the handful I read for this challenge). Look for a year-end wrap-up of some kind in the next few days. In the meantime, Happy New Year to all the bookish people out there in the blogosphere!

Posted by bibliophiliac at 6:49 PM

I should also sign up for a classics challenge. Perhaps it will inspire me to be more bold in my reading choices.