The Way We Live Now

The Way We Live Now
Anthony Trollope
The Modern Library
paperback, 861 pages
original publication date: 1874
Back to the Classics Challenge 2012
Category:  19th Century
Way back in another lifetime (or so it seems) I attended a literary event (a writer's conference, a luncheon, a book festival--I don't even remember). There I heard novelist David Poyer describe the writing habits, prodigious productivity, and addictive books of Victorian novelist Anthony Trollope. From this moment an obsession was born. I decided that I would begin reading Trollope, and work my way through his entire complete works, preferably in the order of composition or publication.
I couldn't swear to it, but I think my first Trollope novel was probably The Warden. And after that I was hooked. I made my way through the Barsetshire series, and then through the Palliser series. The whole time I had my eye on The Way We Live Now. It is probably a symptom of some special bibliophilic neurosis that I felt I had to read the two series before I could read what is arguably Trollope's finest book (note everyone agrees with this assessment, but it is a popular consensus). Against neurosis is the fact that I have allowed myself to skip The Macdermots of Ballycloran, and in no way feel compelled to read Sir Harry Hotspur of Humblethwaite--although, let's be honest, I probably will read that one.
The Way We Live Now has all the usual pleasures of Trollope: engaging characters, a special sympathy for the lot of women, a sense of the ridiculous, satirical swipes at social climbers and government lackeys. But The Way We Live Now feels remarkably current, prescient even.
In some ways the plot of The Way We Live Now seems ripped from today's headlines. Augustus Melmotte arrives in London under the pretence of being English and a gentleman. In truth he is neither, but he is treated as both by all the world because he apparently possesses both a large fortune and the abiblity to create riches for himself and for others.
Melmotte also has a daughter, Marie, who is instantly sought after and courted for the large fortune she stands to inherit. Marie is a sympathetic character at first, then less so, but her character illustrates a fact about young women in Victorian England: they were at the mercy of their families and the large social structure when it came to marriage. Young women without money were pitiable because they had to marry for money (or risk being a burden on their families); young women with money were pitiable because they were treated somewhat like horses or other chattel, and stood very little chance of finding themselves married to a kind and loving man.
Besides the Melmottes, there are two other families that figure in the main plot of The Way We Live Now: the Carburys and the Longstaffes. In the Carbury family the moral hero of the story is Roger Carbury, squire of Carbury Manor. He represents traditional British morality, the idea of the gentleman, and is stuffy, dull, sincere, and more or less the moral center of the book (such as it is). Roger Carbury is in love with his cousin Hetta, but she, of course loves someone else. Hetta lives with her mother, who makes her living as a writer (allowing for satirical commentary on the state of publishing) and her brother, Sir Felix Carbury--a wastrel, scoundrel, cad...really, no words are strong enough. Sir Felix, naturally, pursues Marie Melmotte. Then we have the Longstaffe family, who have title, position, property, and no money at all. There are also two Longstaffe daughters, who have been lingering long enough on the marriage market that they may have passed their "sell by" date.
I'm so glad I waited for this book. I would agree that it is one of Trollope's finest, if not his very finest novel. Having read some of the other novels, especially the Palliser series, prepared me as a reader to understand some of the political context for the novel--and the idea of the gentleman, and what that means in a Trollope novel, is familiar territory now. But really, I think that any reader will appreciate The Way We Live Now for its rich texture, its satire, and for the broad canvas on which Trollope paints a panorama of interrelated characters. Some attitudes, typical for British citizens of the day, will be repugnant to today's readers; I'm thinking particularly of the prejudice toward Jews that Trollope depicts. In the case of this novel, it can be difficult to discern if these attitudes are those of Trollope, or simply those of his characters. In general, I try not to judge a previous era by the social attitudes of our times, but readers will flinch, as I did, at the openly biased views of some of Trollope's characters. Critics and readers debate whether Trollope was actually satirizing anti-Semites, since a Jewish character, Breghert, is one of the more moral men in the book. This is something an individual reader must decide.
The Way We Live Now is very much like the way we live now: CEOs and moguls are celebrities, and sometimes the fame and the wealth are entirely illusory. Speculators, and people who create wealth, seemingly out of nothing, ascend and are glorfied....and then descend. It is an absorbing and brilliant book; I'm glad I finally read The Way We Live Now.
For more on the life and works of Anthony Trollope, here are a few links:
﻿The Trollope Society: http://www.trollopesociety.org
http://www.anthonytrollope.com
http://www.vitorianweb.org/authors/trollope/index.html
This is the second book I've completed for the Back to the Classics 2012 Challenge!
I still have until Desember 31st, so there's hope.
Thanks to the indefatigable Sarah at Sarah Reads Too Much for sponsoring this challenge! 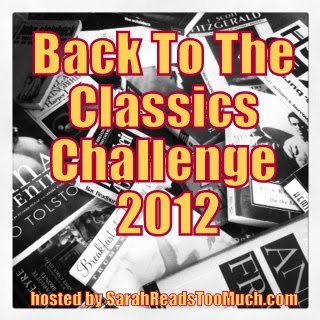 Posted by bibliophiliac at 4:40 PM

I've wanted to try some Trollope, but was unsure where to begin.

So I've had no strong urge to read Trollope but you've sold me -- not just on this book but on attempting his bigger series.

@Bybee-I think the best Trollope novel to start with is The Warden. If you like that one, then keep on going!
@Audra-Yay! Another convert! Now, what book or series would you urge me to try?