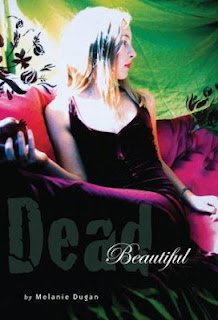 The myth of Persephone and Demeter has long been one of my favorite stories. So I was intrigued by the premise of Melanie Dugan's Dead Beautiful. The novel was not at all what I expected, but I found it smart, funny, entertaining, irreverent, and poetic all at once.

Melanie Dugan tells the story of a rebellious teenager who is at once devoted to her mother, Demeter, and yearning for independence. Anyone who has ever raised a daughter understands. In Dugan's retelling, Hades does not abduct Persephone and steal her away to the underworld--to the contrary, Persephone feels an electric attraction to the Lord of Death (an attraction that is reciprocated). Dugan's Persephone is enormously appealing: she's quite serious about her work developing gorgeous flowers in exotic shades, but she's also a wisecracking, cynical young adult who criticizes the stuffiness and decorum of Mount Olympus.

Dugan's gods, godesses, and demi-gods (such as Darryl, "Demi-God of home repairs") have typical human problems. Demeter is trying to raise a child on her own; Zeus is trying to keep his wife, Hera, and his former lover, Demeter, from clashing at family get-togethers. Meanwhile, Hera tries to get her ADHD son, Hermes, to focus on one task at a time by bribing him with the newest in winged sandals. Clearly this is not your Bullfinch's version of the gods.

Dugan's gods and godesses use slang and deliberate anachronisms, and frequently reference our human world. They also apparently have boring meetings and forms to fill out, even in Hades. The voices of the main characters are distinct and entertaining: the story is told, alternately, by Persephone, Demeter, Hades, Zeus, and Persephone's friend Cyane. The story moves swiftly in short chapters, and despite the often comic tone of the novel, the writing is imagistic and poetic--a unique and winning combination.

I loved Dead Beautiful: it was a delightful, fun read with dense, poetic imagery woven throughout the narrative. Highly recommended for those who like smart, funny writing and the pull of an ancient tale.

Posted by bibliophiliac at 2:19 PM

Which means, if you add them together...I'm gonna have to get this book. :)

@christina-I agree, the cover is divine!

Sounds like the sort of book one would either love or hate. I guess I shall have to try it to see which category I fit into.

Sadly, I didn't love this book despite enjoying Dugan's writing style -- I couldn't tell if it was YA or not and Persephone so bugged me! :/

I LOVE this myth and I'm excited to see it adapted to modern language.

@Audra-I never thought about Dead Beautiful being YA--maybe because I don't read much that is written for that age group (it is an age category, not a genre, right? or is that something of a question...) I think Dead Beautiful is written for adults--at least that is how I read it. It was definitely quirky, but just the thing for me as my school year comes to a close (and I have a zillion papers to grade etc...). I found the Persephone character very appealing (she actually reminded me of some of my students!). We can agree on the writer's style, which I really enjoyed!

Great review! As a huge fan of re-tellings and Greek mythology, I loved it too :