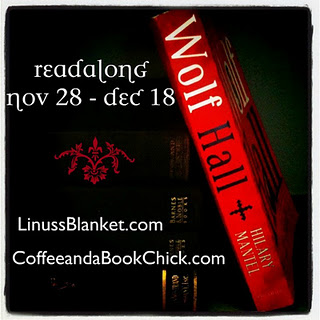 Wolf Hall Parts Three and Four﻿: death, intrigue, heresy, subterfuge, spies. Cardinal Wolsey dies (you could say of a broken heart). Thomas Cromwell, the protagonist and unlikely hero of Wolf Hall shows political talent: he allies himself with King Henry VIII and Anne Boleyn. Even as Henry VIII begins to distance himself from the Pope and consolidate politcal and religious power, his former friends and supporters are being tortured for various crimes, some of them religious.

The poet Thomas Wyatt enters the story. A strange anecdote is told of how, as a boy, Wyatt saved his father from being attacked by a pet lioness by diverting the animal's attention to himself. This story resonates, and had me wondering: is the lion in the story Henry (often referred to as a lion) or Anne Boleyn? And is Thomas Cromwell diverting the lion? 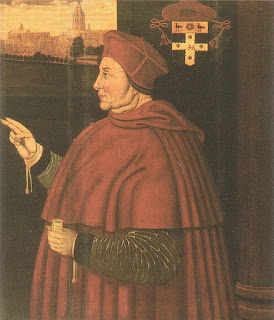 Portrait of Cardinal Wolsey
"What was England, Before Wolsey? A little offshore island, poor and cold." (213)

"'Your father told us all about the lion. Nowadays, I think back on it, and it doesn't seem to me like a thing I would do. Stand still, in the open, and draw it on.' He pauses. 'More like something you would do, Master Cromwell." (287)


Wolf Hall is filled with violent torture and punishment. Cromwell thinks back to his boyhood, when he witnessed a heretic burned at the stake. Later, he watched as her friends came and gathered her remains-mostly bones.

"By the time the smoke cleared and they could see again, the old woman was well ablaze. The crowd began cheering. They had said it would not take long, but it did take long, or so it seemed to him, before the screaming stopped." (290) 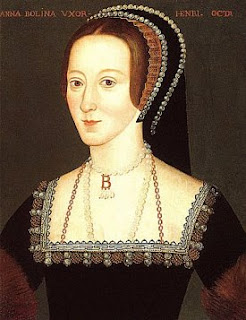 "One of those afternoons when I told my king a little, and he told me a lot: how he shakes with desire when he thinks of Anne, how he has tried other women tried them as an expedient to take the edge off lust, so that he can think and talk and act as a reasoning man, but how he has failed with them...A strange admission, but he thinks it justifies him, he thinks it verifies the rightness of his pursuit, for I chase but one hind, he says, one deer timid and wild, and she leads me off the paths that other men have trod, and by myself into the depths of the wood." (298)

The above quotation draws directly on the imagery of the Thomas Wyatt sonnet I quoted in my first post on Wolf Hall. It's one of the lovlier passages in the novel.

Wolf Hall is filled with beautiful prose and resonant images. As I read I feel a sense of forboding, as so many who are close to Henry VIII or Anne Boleyn fall. The tension and almost tedium of the King's desire to be free from his marriage to Katherine is like an overhanging cloud. And I keep remembering that when Henry finally achieved his desire, he was only married to Anne Boleyn for three years before he had her beheaded.

So far I find Hilary Mantel's novel well-written, complex, but hard going at times. This does seem to be the kind of novel best appreciated in retrospect. I'm looking forward to reaching the end-I'm very curious to see how Mantel concludes this novel, and whether I will coming loving it or feeling very "meh."

Check out Natalie's much more thorough review at Coffee and a Book Chick, where you can also find links to other reviews from the readalong.

Posted by bibliophiliac at 6:55 PM

Was't that an interesting story about Thomas Wyatt and the lion? I couldn't stop thinking about as well, and a part of me thinks that, while Anne is definitely the more manipulative one between her and Henry, I start to wonder if perhaps Henry is the lion since we know what ultimately happens to Anne. But, it's interesting some of the symbolism that Hilary Mantel has within the story. This is when I actually miss being in school 16 years or so ago and being able to study these types of things and really debate an issue or thought.

This section also was so incredibly brutal. The descriptions of the woman who was burned was just gruesome; I cringed through each image that Mantel described. Made my stomach turn!

I'm also looking forward to the conclusion; I know a few things that have happened, but not all, so I'm on pins and needles! I hope you end up really liking it. I struggled in the first thirty or so pages and then everything just really started to click and flow for me. I hope you end up loving it, but conclusions are so important, so I'm crossing my fingers that it meets all of our expectations.

Thanks again for joining! Just think, five more days and we will have read Wolf Hall! Woohoo :)

i found it to be a slow read too but so, so rewarding. keep going !:-)

I am getting more and more interested in this book!

@Natalie-yes, there is definitely a beautifully crafted pattern of imagery and symbolism throughout the book-one of the things that keeps me reading. I'm lucky to be *in school* for life! (English teacher!)

I agree with you also about the brutality-that's an aspect of this era I hadn't given much thought.

@Marie-if you say it's worth it to keep going, I think I'll forge ahead (actually, I'm committed, thanks to the readalong...)!

@Bybee-me too, but it is definitely still a slow read...

I haven't read your final comments because I still want to read this one, but I like your point about the slow-going books as the ones best appreciated after the fact. I'm glad I have a heads up on the pacing/nature of the book so I know to power through if/when I finally get around to reading this one...