The Last Book of the Year 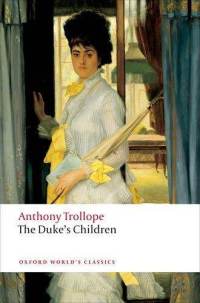 In December of 2009 I began this blog in earnest, and one﻿ of my bookish New Year's Resolutions was to read more Trollope. How appropriate, then, that my last book of 2011 was The Duke's Children, by Anthony Trollope. On the next to last day of 2011, I finished the last book in the Palliser series. It only took me four years to read the six titles that make up the Palliser novels (Can You Forgive Her; The Eustace Diamonds; Phineas Finn; Phineas Redux; The Prime Minister; The Duke's Children). That's a total of 4,340 pages--but who's counting?

I felt a little sad when I realized that I had just finished the last of the Palliser novels. I loved the Barsetshire novels, but the Palliser books were my dish. Glencora and Plantagenet Palliser, Madame Max (Marie) Goesler, Phineas Finn: these are characters I came to know over the landscape of six novels, a world entire. Of course, I cheered up once I realized that I can always begin rereading the series this year.

Trollope was an enigma: at times he seemed a stodgy conservative. He was obsessed with the ideal of the English gentleman (a complex idea that he worked out in every novel). While he purportedly disliked feminism, his female characters and their constraints are portrayed with sensitivity, compassion, and liberality. And he had a close friendship with Kate Fields, an American feminist, on whom a character in The Duke's Children was partially modeled. And, most endearingly, he accepted and befriended George Eliot (pen name of Marian Evans). Eliot loved Trollope for his admiration for her common-law husband, George Lewes, and admired Trollope's novels. She even asserted that she might not have attempted the panoramic scope of Middlemarch without  Trollope's example (see Oxford Reader's Companion to Trollope).

I like knowing this sort of thing, and I like thinking about how the works of my favorite writers interconnect. Middlemarch is my favorite novel; I've read it three times, (maybe four?) and each time I read the novel the experience is richer. I like to imagine Trollope and Eliot and Lewes sitting down to dinner and discussing life and literature.

Now that I've finshed the last of the Pallisers, it's time to move on to a novel I've been wanting to read for years: The Way We Live Now. Many consider this to be one of Trollope's finest novels, although the entire Palliser series was considered by Trollope himself (and many others) to be Trollope's finest achievement.

Oh my, that is quite an achievement. I have only begun my journey with AT reading The Warden in December but definitely looking forward to more.

My last book for the year was a reread of Mansfield Park.

I'm so impressed that you reading Trollope. My last book of last year was How to Say Goodbye in Robot by Natalie Standiford and my first of this year is If Jack's in Love by Stephen Wetta. Happy New Year!

I "discovered" Trollope myself early this year. I've read three so far, but haven't gotten to any of the Palliser series yet. Next up for me is Barcester Towers.

You may already be aware of her, but if not, fellow blogger Ana the Imp (linked on my blogroll) has also been reading through the Palliser series, with substantive posts on the ones she's completed.

Maybe this year, I will finally read a book by this author. Shame, shame!!

@Cat-you can't go wrong with Jane Austen! Reading Trollope is equally addicting...
@bermudaonion-don't be impressed! Trollope's books are long, but very entertaining!
@bibliophilica-thanks for the info-I'm going to check out Ana the Imp!

@BookQuoter-I have a feeling you will like Trollope. Start with The Warden!

THE STARLIGHT DRIVE-in by Marjorie Reynolds.

THE CONFESSION by Charles Todd.

OLD FOLLOWER....stopping by from the Blog Hop.