Book Review: Wherever You Go 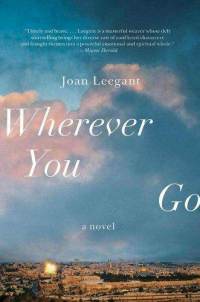 There are writers who excel at telling a story and there are writers who seem to effortlessly create lucid, beautiful prose. It is unusual to find a writer who does both equally well, but Joan Leegant seems to be such a writer. In Wherever You Go she spins her complex and inevitable tale so expertly that you will be reluctant to put this novel down, and she does it with beautifully crafted prose. It's always a pleasure to put yourself in the hands of a writer who has this kind of confidence and assurance.

Wherever You Go weaves together the stories of three characters. Yona Stern is a thirty-year old single woman living in New York, dating married men, and working at an art gallery. Mark Greenglass is a teacher of the Talmud who now lives in Jerusalem, having escaped a life of addiction through religious faith. And Aaron Blinder is a miserable college student whose father, a well-known Jewish writer, has exploited the Holocaust in his popular and melodramatic novels.

Each one of these characters is driven by an emptiness: Yona by the chasm between herself and her sister, an Israeli settler with a large family and a zealous husband; Aaron by his sense of failure and rejection; and Mark by his sudden loss of faith.

Yona, estranged from her sister Dena, goes to Jerusalem to mend the relationship, to make amends, and to beg for forgiveness. She finds her sister living in a West Bank settlement, entrenched in ideology, and completely uninterested in a relationship with her sister. While she is in Jerusalem, Yona has time to think about the events, ten years earlier, that caused her rift with her sister, set her adrift, and caused her to give up her dreams of becoming an artist. Yona is refreshingly honest with herself about her own shortcomings, the mistakes she's made, and the pain she's caused. She is an enormously appealing character, funny, self-deprecating, yet painfully earnest in her desire to make amends with her uncompromising sister.

Mark Greenglass is a man caught between two worlds. When he goes to New York to teach, he stays with his wealthy non-religious parents and secretly visits the drug-addicted former girlfriend he can't forget. Mark himself can hardly understand how he came to be saved by faith, and he is shaken to discover that the faith he has rebuilt his life on seems to have disappeared. He returns to Jerusalem to begin a new chapter of his life, one not centered in Orthodox practice.

Aaron Blinder is a mediocre college student who has followed Julie, a pretty classmate, to Jerusalem for a semester-abroad program. Aaron is painfully aware that he is a disappointment to his famous, difficult father. The semester-abroad program and Aaron's unrequited crush on Julie give Aaron another taste of failure, shame, and resentment. Aaron is primed for religious radicalism.

Leegant's narrative is artful and elegant, and the reader at first doesn't even notice the tightening of the narrative threads, so engrossing are the individual stories. I admit that I was unable to restrain myself; instead of savoring this novel slowly, I finished it in a single day, scarcely stopping for meals. Wherever You Go is a beautifully realized story of love, art, and faith. Highly recommended for all readers-I can't imagine the avid reader who won't find something to admire in this novel

For more about Joan Leegant and her work, visit http://www.joanleegant.com/

Posted by bibliophiliac at 3:54 PM

As you say, storytellers who excell at one aspect of writing often are less than perfect at another. She sounds like another writer to add to my list when I'm next browsing in the library.

Great review! I'm adding this to my TBR list.

I loved this book too :)

@Scriptor Senex-happy browsing!
@SmallWorldatHome-I hope you will enjoy..
@Sam-I love it when other people confirm my opinion ;)