Review: Before I Go To Sleep 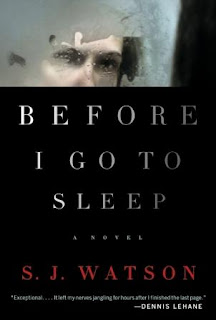 Before I Go To Sleep
S.J. Watson
Harper
360 pages
a copy of this book was provided to me by the publisher through TLC Book Tours

Christine Lucas has suffered a traumatic head injury and this is her life: each morning she wakes up next to a strange man who tells her he is her husband. Each morning he shows her a scrapbook and tells her about her life. But Christine is secretly seeing a doctor who aks her to keep a journal. It is these journal entries that tell the story of Christine's struggle to form an identity out of scraps of memory and stories told to her by her husband. She has some photographs, a scrapbook, and the journal, which she discovers each morning as if for the first time.

Before I Go To Sleep succeeds as a psychological thriller-it is suspenseful and creepy, and you'll want to keep turning those pages. It also succeeds as a meditation on the nature of memory and self; it is painful to see Christine try to piece together her own life, try to access memories, not knowing if they are memory or fantasy.

Christine's secret meetings with her doctor, her secret journal entries, begin to reveal cracks in the stories her husband Ben has been telling her. Totally dependent on Ben even for her sense of self, her history, her survival, Christine secretly works at rebuilding her memory. Through the journal entries, the reader sees a woman beginning to build a picture of her own life, her own personality. And the reader begins to sense that there is something important that Ben has been hiding from Christine.

I read Before I Go To Sleep in one sitting-it's that kind of book. It holds you in it's grip until the last page. The narrative builds to a kind of dreadful pitch, and S.J. Watson knows exactly when to tighten the screws. My only quibble with this book is a slightly too tidy ending. Some readers may feel that loose ends are a little too neatly tied. This almost seems beside the point-because Watson delivers what the reader craves, and exciting read.  Before I Go To Sleep is a perfect summer read, suspenseful, chilling, with plenty of twists and turns. I appreciated the intelligence of the main character, the painful predicament in which she found herself, and her brave attempt to find her way out through writing.

Posted by bibliophiliac at 8:49 PM

Labels: Review of Before I Go To Sleep

I love a "book that's so good you can read it in one sitting." Love that! Looking forward to reading this one!

I am envious of the number of readers who have got the chance of reading this so soon!

@Coffee and a Book Chick-I don't think you'll be disappointed.
@Mystica-check out the facebook page-I think you can read excerpts there.

I agree. This was a great read but the ending was a little too neat. I guess it'll make a great movie, though.

Thanks for the review.
Ann

This is the kind of book I like to read on the RARE occasions that I have an evening to myself. So glad you enjoyed it - thanks for being on the tour.

I recently read and reviewed this book over on Random Jottings. Very filmic!

I just bought this, and started reading it today, because it seems so interesting! Now I'm afraid I'm the one who won't sleep so well... :)

Oh this one sounds good!

It reminds me of Memento - the movie with Guy Pierce. Completely threw me for a loop, have you seen the movie??

Review has me counting my change... hello INdigo... I'm a coming :)

I can't wait to read this book, though I've had so many incredible books to occupy me this month! I've read nine books in June so far, which must be an all-time record for me. Every one has been superb!

Appreciating your blog as always!