Review: House of Prayer No. 2 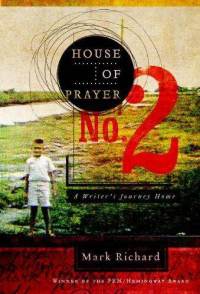 House of Prayer No. 2: A Writer's Journey Home
Mark Richard
Nan A. Talese/Doubleday
published February 2011
hardcover, $23.95
201 pages
a copy of this book was provided to me by the publisher

If Flannery O'Connor and William Faulkner had a child--a special child, crippled by time and memory, slightly touched in the head and the spirit--that child would be Mark Richard, and he would write this book. House of Prayer No.2: A Writer's Journey Home got under my skin from page one, and I don't mean that in a good way at all. The second person point-of-view has that effect on readers. Here's the first couple of sentences of Mark Richard's memoir:


Say you have a "special child," which in the South means one between Down's and dyslexic. Birth him with his father away on Army maneuvers along East Texas bayous. Give him his only visitor in the military hospital his father's father, a sometime railroad man, sometime hired gun for Huey Long with a Louisiana Special Police Badge.

This goes on for forever. It made me really want to hate this book. Here's another excerpt


One night while his mother is fixing supper, bad luck starts for the special child. He is in the living room, where he had seen an angel pass through Easter morning, watching The Three Stooges with the sound turned down real low because The Three Stooges upsets his mother. It is a good Three Stooges.

Richard defies every expectation of a traditional memoir. The House of Prayer No.2 is chronological in the sense that a rushing river is chronological: the memoir certainly pushes forward relentlessly, but it pulls the past and the future along with it. There is little mention of dates or years--the kind of thing that usually gives a memoir structure. And the device of using the second-person and the third-person (never the first-person) certainly defies the conventions of memoir.

Inexorably, and more or less against my will, Richard wore me down, first with the ineluctable beauty of his prose, then with the strange and wondrous workings of his mind, and finally with the unexpected spiritual dimension of the writing (this is a book in which the sacred and the profane rub elbows).

House of Prayer No. 2 is both a spiritual autobiography and the story of a writer's journey. Richard's sentences are like flood waters, carrying everything with them--past and present, all the details of the moment and the detritus of the past. Like this:


Say you are a special child. Say one reason you are special is because there is something wrong with your legs. You cannot run. Your legs will not move fast enough. When you try to run, your hips click and pop. When you have to run a race, like at the going-away party at a doctor's house in the old town, when everyone was running toward the doctor's house that would burn completely to the ground the next year, you pretend to trip and fall and not finish the race.

Richard takes the reader through a childhood filled with pain, but seems to distance himself from that pain through his unusual narrative technique. The child of an intensely religious mother and a perfectionist, alcoholic father. Richard is "special" in more ways than one: he pays attention to the world, but not like other children; he is extremely intelligent, but is perceived as "slow," and he has a condition which leads to his hospitalization and numerous surgeries that quite frankly sound brutal and primitive. This is a pretty good recipe for the fermentation of a writer. Then add some Faulkner:


You finish reading Light in August and you don't understand a lot of it and it doesn't matter. You are learning that time doesn't always move forward, sometimes it moves backward.

For this reader House of Prayer No. 2 gained strength as it went on--or maybe I just became accustomed to the backward/forward flow of time, the river-long sentences, and the surreal quality of Richard's life (or is it just his prose-hard to distinguish between the two). In the end I was convinced House of Prayer No. 2 was a brilliant book. Richard spends time in churches, bars, and boats, and all seem equally holy in his eyes.

There's one vignette in House of Prayer No. 2 that describes the genesis of Richards story "Strays" (from the collection The Ice at the Bottom of the World). This segment of the book would probably be as good as a college writer's workshop if you read Richard's story with it. He describes how he accompanied a friend to "a place where he has to collect some rent from some people." Richard waits in the car, pistol in the glove box, and watches some stray dogs:


They keep going around to one side of the house and keep sticking their heads up under the foundation, and their throats move as if they are drinking....You've got one of your little notepads on your lap and you need to borrow a pen, and as you drive off, he asks you what you are writing, and you don't answer but what you are writing is: At night, stray dogs come up underneath our house and lick our leaking pipes.

Richard goes home and keeps going over that sentence because "you've learned from Gordon [Lish] that everything you need is in that first line, all you have to do is unpack the story, its metronome is already ticking back and forth." If you read The Ice at the Bottom of the World you'll find that some of the stories in the collection end up implanted in you brain as if they were your own memories, disturbing as a bad dream, hallucinogenic as a strange drug. House of Prayer No. 2 is like that too. Recommended for the descendants of O'Connor and Faulkner, their progeny, and all who are touched in the head, the heart, or the spirit.
Posted by bibliophiliac at 3:43 PM

Labels: Review of House of Prayer No. 2

This sounds like a book I'd really enjoy. Thanks for a fabulous review.

@bermudaonion-thanks-it is definitely different, hard to categorize, and difficult to review.

The book sounds great, but your review is quite a piece of writing in and of itself. Thanks for sharing.