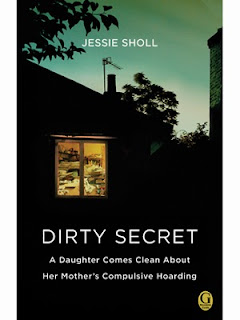 This is a book about a dirty secret, the kind families try to hide behind the closed doors of a home.  Jessie Sholl's memoir Dirty Secret:  A Daughter Comes Clean About Her Mother's Compulsive Hoarding captures the sense of shame that accompanies such secrecy. The secret could be substance abuse, alcoholism, or mental illness; in the case of Sholl's mother, the secret is inside the house, where even family members don't cross the threshold for years at a time.

The secret of Jessie Sholl's mother (Helen) reverberates through the writers' life, finally reaching a crisis when the writer receives a call from her mother.  The news is bad:  Sholl's mother has cancer.  The reaction Sholl has is startling:


My first thought:  My mother is going to die.

My second thought:  I can finally clean her house.  She hasn't let me inside for more that three years, not since the last time I cleaned--or rather gutted it.

According to Sholl, an estimated six million Americans live this way, so trapped by clutter and junk that they live lives of isolation, sometimes endangering their health. It is a disturbing phenomenon that has become familiar to American viewers through various television programs that bring cameras into the homes of hoarders.  If you've ever seen one of these shows, you know what the home of a hoarder looks like.  As Sholl describes it, "every surface, every potential spot to sit down, is covered with junk.  There's just so much junk, so much worthless, heartbreaking junk."

Hoarding was once thought to be the result of deprivation, then considered a symptom of obsessive-compulsive disorder.  There doesn't seem to be much agreement about the causes of hoarding, but brain scans show that hoarders have decreased activity in the areas related to memory, decision making, spatial orientation, and emotions.  There may be a genetic component; often hoarding is triggered by a traumatic event.

For Helen, the trigger seems to have been the death of her boyfriend of ten years.  Always something of a packrat, Sholl's mother seems to have responded to a devastating loss by hoarding.  In her memoir, Sholl depicts Helen with humor, frustration, and finally with compassion.  I can see her so clearly:  a little roundish woman wearing a sweater coat, looking a little rumpled, laughing at the oddest things.  The portrait of Helen is ultimately an affectionate one, although there are moments of frustration, anger, and despair.  Sholl recognizes that her mother has "a mystifying mental illness that happens to have a depressingly low rate of recovery."  And this memoir doesn't have a happy ending in the sense of a makeover show with a "reveal."  At the end of Sholl's memoir Helen hasn't changed much, and her home is still in a state most of us would consider unlivable. What does change is the attitude Sholl has toward her mother and the towering problem that causes Sholl anguish, shame, and physical illness.

As I read this book I kept wondering what Sholl's mother would think of this memoir.  Many of the memories Sholl writes about are sad, painful, and don't reflect well on her mother.  And most of us would feel a scalding embarrassment and shame at the story of how Helen infects Jessie, Jessie's father and stepmother, and Jessie's husband with scabies from a pillow picked up at a consignment shop.  The whole extended family goes through a traumatic bout of itching and futile attempts at treating the insects, while Helen vacillates between denial and self-punishing treatments, including bleach baths.

Dirty Secret is a memoir that faces painful truths.  Sholl writes about her life without self-pity or blame.  As she comes to terms with her mother's illness, Helen's often unintentionally cruel attempts at humor, and the far-reaching effects on the lives of those around her, the writer comes to view her mother with a measure of compassion.  Toward the end of her memoir, Jessie Sholl imagines herself as a microscopic being, entering her mother's mind.  In this scene the writer comprehends her mother's isolation, her confusion, and her fear.  Without this scene Dirty Secret would have been a harsher book.

Sholl is a graceful writer, and she tells her story with enough humor and lightness that the reader isn't overwhelmed by the subject. Sholl's relationship with her husband, writer David Farley, acts as a counterbalance to her difficult relationship with her mother.  Farley was a fellow-sufferer for many of the worst incidents of the book, and he comes across as the kindest of men.  Sholl's father and stepmother, while they too have their problems, seem like beacons of sanity.  And Sholl's dog, Abraham Lincoln, is a canine character in this memoir--the story of his rescue is one of the more compelling incidents of the memoir.

Hoarding is a strange and fascinating phenomenon, and Sholl gives the reader a sympathetic glimpse of the world of a hoarder. For readers who enjoy well-written memoir, and those interested in how a mental disorder can impact the lives of the sufferer and her family, Dirty Secret is well worth your time.
Posted by bibliophiliac at 5:16 AM

This title seems interesting even if it might be somewhat heartbreaking. I'll have to add it to the tbr list. Nice review.

Thank you for your review. I've eyed this book, but didn't know if I was ready to read it. I am the child and grandchild of hoarders. Although I am not a hoarder, the scars run deep.

Definitely am looking forward to reading this one. This topic fascinates me - I've watched the Hoarders show on A&E and have can't seem to change the channel. It's a subject matter that I'm glad to see is not something to run away and hide from, but to instead recognize that it's much more than just someone being "messy." Great review!

@Beth-I really couldn't put it down. It was intense, but not depressing.
@Pamela S.-I think you'll find this book helpful to process what you've been through
@Coffee and a Book Chick-Hoarders is compulsively watchable. Dirty Secret is definitely an insider's view of the disorder.

Nice review and fascinating topic. I read Stuff, last year, also about hoarding. It was strange how some of hoarding behavior just seems crazy, but when I read their explanations, they seemed oddly sane and like something I might think myself.

What a great way to end my evening, yes I go to bed early but it's always nice to do a bit of catching up and this post wraps up my day.

topic of hoarders is very hot now with the A&E series on Hoarders. Makes my heart bleed to see them go through turning their lives and the pain that afflicts everyone around them.

Going to add this one to reading list and thanks for rounding up my night.

@Robyn--I know what you mean.I can understand the thought processes that lead to hoarding. I do want to read Stuff, too.
@AisleB--you always make my day! I think you will enjoy Dirty Secrets. Thanks for dropping by!

I once watch an episode on The Jury (or something like that) and the person to be dressed or changed by the jury was like this. Dead cats, empty food tins and everything one could think of. So pathetic.

@Nana--that sounds like animal hoarding. Animal hoarders collect unmanageable numbers of animals (they mean well, but are not able to care for them).

I really want to read this one! Thanks so much for the heads-up and the review.

I m a hoarder but luckily mrs stu isn't I not as bad as I used to be ,this be a interesting read it can get out of hand when you let hoarding go ,all the best stu

Very interesting stuff. I know a few people that are on the precipice of being a hoarder. Meaning, they hoard stuff, but keep the house relatively clean so no one can really complain. I've seen a few shows, and the it's just heartbreaking. I'd be paralyzed by the mess.

@Bybee--highly recommended...
@stu--I really felt compassion for Jessie's mother, since I have a bit of a book hoarding habit!
@JennyO--this really is a hot topic right now. Thanks for stopping by.

It's hard to imagine how deep the dysfunction can deteriorate to before it gets actually recognized for what it is. So sad.

Thanks for stopping by. I wanted to read steampunk, thus Clockwork Angel. It surprised me too. So hard to keep up with so many different genres, but it's always worth a try.