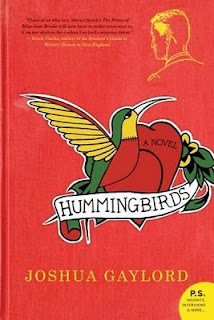 Hummingbirds  by Joshua Gaylord
Harper Perennial
paperback edition 2010
342 pages, $14.99
A copy of this book was provided through TLC Book Tours

Joshua Gaylord's novel Hummingbirds is set in the posh all girls prep school Carmine-Casey, an environment as dazzling and distant to most of us as the girls who go there.  English teacher Leo Binhammer, known simply as Binhammer to his students, navigates the flittering attentions of his students, as well as the attentions of his colleagues--a collection of maternal flirters, stalwart old grumps, and nervous divorcees.  Into this privileged and rarified setting enters a new member of the English faculty, Ted Hughes.  Gaylord plays with literary allusion throughout the book, giving his character the name of the wolfish English poet who was married to Sylvia Plath, and evoking Fitzgerald's Gatsby--especially in the strange relationship between Binhammer and Hughes.  Binhammer realizes, on meeting his new colleague, that they have a connection--one Binhammer fails to divulge, with real repercussions later on.

Hummingbirds is beautifully written, with prose that is effervescent and clear.  Gaylord strikes just the right tone in writing about the relationships between teachers, the rivalries and shared rapport.  Even more tricky is the territory of relationships between students and teachers, especially male teachers surrounded by girls and women.  Binhammer is far from a man's man--he is a feminist, married to a scholar, Sarah Lewis, who is clearly smart and beautiful, and who Binhammer adores.  Leo Binhammer and Ted Hughes have a sort of "bromance" interrupted by the tension of Binhammer's undisclosed secret, as well as his rivalry for the devotion of their students.

The students exist in the rare air of Fifth Avenue; they are carelessly sensual and childishly provocative.  Dixie Doyle, a clear-eyed girl who wears her hair in pigtails and sucks on lollipops, vies with Liz Warren, a brilliant playwright and sarcastic wit, for the attention of the two male teachers.  As Binhammer's deception (a sin of omission) begins to unravel, the flirtations between students and teachers become more fraught with genuine tension.  If all this sounds a bit melodramatic, it's not at all.  In fact, Gaylord handles his plot with tightrope ease, creating an ending that is surprising but also just right.

Hummingbirds is compelling, intellectually engaging, and fun to read.  Recommended for those who like good contemporary fiction in an academic or urban setting, or for those who just love good writing.  For more about the novel or the author, Joshua Gaylord's web page is here:  http://joshuagaylord.com

This sounds quite interesting. I always found the dynamic between male teachers and female students is always somewhat intriguing. Thanks for the review! This might be something I need to check out.

sounds very interesting...adding it to the TBR pile :)

Excellent review! Like Brenna, this is a topic that intrigues me too. Plus, I absolutely adore hummingbirds. I have two one-liter feeders on my patio that the little fellows empty every 24 hours! Your description of "effervescent" is so spot-on for these beautiful flying jewels.

I am going to find a copy of this novel. Thanks!

I'm glad that you point out that the book is not melodramatic. It certainly seems like it could have gone that way in the hands of a less skilled author.

Your comment on how well written the characters and plot makes me think that this one might just appease my intelligence... yes, it comes out at times, I admit despite my attempts to hide it.

Interesting to read how students and teachers dance around each other in this one.

@Peppermint PhD--it is very well written, and there are few novels that offer this kind of insight into the lives of teachers and students...
@Chris--hummingbirds really are one of the miracles of nature...