Review: Financial Lives of the Poets 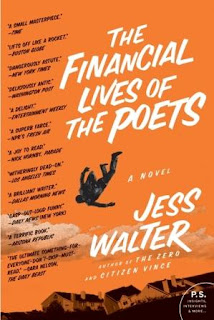 Remember what your Mom told you?  Nothing good happens after midnight.  Boy, was she right.

Jess Walter's seriously funny novel, The Financial Lives of the Poets begins with its protagonist, Matt Prior, walking into a 7/11 after midnight.  Matt walks into the realm of the wasted and the buzzed with his life already in serious disarray.  He is jobless, having tossed aside his journalism job to start up a doomed enterprise:  poetfolio.com, a financial website in verse.  Having realized the error of his ways, Matt goes back to the newspaper, only to be sacked after four months, having gone to the bottom of the totem pole (and it is a slippery pole).  Now Matt can't afford the parochial school his two young sons attend, his mortgage, or his wife's expensive on-line shopping habit.  Feel sorry for Matt yet?  Didn't think so.  Matt's life is a maelstrom of failed ideas, the failure of the American Dream, the failure of the entire national economy, and some Very Bad Choices.

Yes, it is a perfect storm of bad luck, bad timing, and bad choices, and so current and familiar that most readers will wince.  But Jess Walter doesn't make his readers cry, he makes us laugh--a lot.  Somehow, Matt's father, suffering from dementia and having lost his entire life savings to a stripper named Charity, is funny rather than pathetic.  And it comes as no surprise to the reader that Matt's wife Lisa is having an on-line flirtation with an old flame--or maybe it's more than a flirtation.

So of course Matt does what any red-blooded American dad would do:  he does everything in his power to make things worse, making every bad choice imaginable, and throwing out very bad verse as he goes.  It is heartbreaking and funny at the same time, but mostly it is funny.

The story told in The Financial Lives of the Poets is so timely that it seems ripped from the pages of the almost-defunct newspapers that are folding all around us.  There is a redemptive story here, but I won't give away the form that redemption takes.  The Financial Lives of the Poets is entertaining, hilarious, and delivers both a rush of adrenaline and a jolt of sober philosophy in just the right proportion. The novel is not preachy, but in the end there is a moral to this amoral story.

For more stops on the TLC Tours go here.http://tlcbooktours.com/2010/07/jess-walter-author-of-the-financial-lives-of-the-poets-on-tour-september-2010/
You may also be interested in Jess Walter's web site here.

A copy of The Financial Lives of the Poets was provided by the publisher through TLC Book Tours.  The provision of this free copy in no way influenced the honest review provided by this reviewer.
Posted by bibliophiliac at 2:31 AM

Labels: Review of Financial Lives of the Poets

Great review - I couldn't agree more, that even though you're laughing at Matt, you actually do feel sorry for him; you sympathize with him, despite the spiral of bad choices and resulting consequences. This was one of my favorite books of the year - and one I've recommended over and over to others. Loved it! Cheers!

I'm so glad that you enjoyed this one! It doesn't seem like something that should be funny but the author certainly makes it that way. Thanks for being a part of the tour. :)

*I* wasn't particularly enamored with this book, but I really appreciated reading your review of it. Thanks for posting

i love books that confound cliches and make us laugh instead! great title too!

Who doesn't want to read something seriously funny? I'll have to look for this one.

Catching up with all the blogs I haven’t had a chance to visit in a while, it was good to hear all your latest news.

@Greg-I'm going to check outyour review-I loved this book too.
@heathertlc-thanks-I'm happy to be part of tlc!
@Emily-thanks for stopping by. I really found this book funny, and real-better to laugh than to cry sometimes.

@Priya-I liked the humor, dark as it was.
@Grad-yes, I know, seriously funny is better than tragic sometimes!
@Petty-thanks for stopping by!

I really enjoyed this one too!