You must change your life. 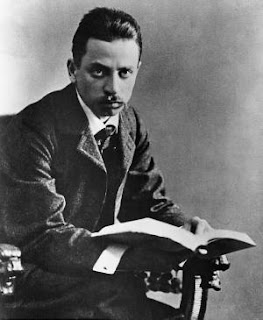 The best that I can do is to read more than one translation. I like bilingual editions, even when I don't know the first language, because I like to have a sense of how the original poem looks on the page. I like to read translator's notes and introductions too, because it gives me some sense of the aesthetic and ethical approaches of the translator. This edition of Rilke's poems has a thoughtful introduction by Robert Haas which conveys the hypnotic effect of Rilke on the reader: "His poems have the feeling of being written from a great depth in himself. What makes them so seductive is that they also speak to the reader so intimately. They seem whispered or crooned into our inmost ear, insinuating us toward the same depth in ourselves" (xiv). The introduction also explores Rilke's biography, his psychology, his friendships, love affairs, and marriage. This volume of collected poems offers a good introduction to Rilke's work, including "The Sonnets to Orpheus," "The Duino Elegies," and excerpts from The Notebooks of Malte Laurids Brigge.

One of my favorite Rilke poems is "Requiem," written on the death of the poet's close friend, painter Paula Modersohn-Becker. Here are some lines from that poem:

"We need, in love, to practice only this:
letting each other go. For holding on
comes easily; we do not need to learn it."
Posted by bibliophiliac at 7:40 PM

This is something that's always in the back of my mind whenever I read a translation. I always wonder, if there's something that I don't get or particularly like, if it's because the work was deficient in some way or if there's some crucial element lost in translation.
This would be an especially vexing problem in poetry because so much is dependent upon the sounds and rhythm of words and syllables. For instance, I've studied a quite a bit of Chinese and find that English translations of Chinese poetry, while sometimes beautiful in its own right, can't really compare to the original. The languages are so different and the speaking patterns and rhythms so disparate that accurate translations are impossibly elusive.
Good post!

Even though I took Latin (4 years) Spanish (3) years, German and Russian in college, I speak none of them anymore. There was a time I could read Latin and Spanish quite well. Of course, with Latin I was more or less left to the ancients, nevertheless, I loved reading things like Cesar's Gallic Wars. But like exercise, you have to keep it up to stay in shape. Translations can be tricky. Oh, and I loved the lines from Requiem. It reminds me of something Joan Didion said in The Year Of Magical Thinking.

Being able to read Rilke's poetry in the original is one incentive to learn the language. Chinese sounds intimidating, but then I would know for sure what my tattoo says. I did take Spanish in college, and Neruda is another one of my favorite poets; his work sounds completely different (more fluent, fluid, and beautiful) in Spanish.