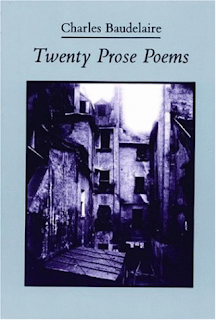 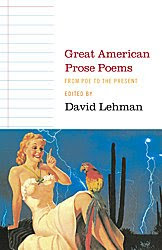 The prose poem is an intriguing form--or some would say "medium for poetry." The term "prose poem" seems to be a contradiction, a paradox, or an oxymoron. Lewis Turco, in The New Book of Forms: A Handbook of Poetics says: "If a poem is not written in verse--in a metrical prosody--then it is written in prose. Usually the lines are determined by line-phrasing--that is, lines are phrases or some other unit of grammar." The poetry site poets.org says "the prose poem essentially appears as prose, but reads like poetry..."

One of the earliest practitioners of the prose poem was Charles Baudelaire. City Lights has a translation by Michael Hamburger, with a brief introduction, of Twenty Prose Poems by Baudelaire. Here are the opening lines from "A Hemisphere in a Head of Hair": "Long let me inhale, deeply, the odour of your hair, into it plunge the whole of my face, like a thirsty man into the water of a spring, and wave it in my fingers like a scented handkerchief, to shake memories into the air." (31)

One anthology is Great American Prose Poems: From Poe to the Present, edited by David Lehman. In his long introduction, Lehman traces the history of the form (or medium) of the prose poem; he also attempts some definitions. He writes that "In the prose poem the poet can appropriate such unlikely models as the newspaper article, the memo, the list, the parable, the speech, the dialogue." (13) A reader might reasonably ask the difference between a prose poem and the very short forms of fiction that have recently become popular: the "short short," "flash fiction," and "sudden fiction." I suppose in the end it is the intention of the poet or fiction writer that determines whether a paragraph or a page of written prose is very short fiction or a poem.

I love the poem "Loading a Boar" by David Lee; this poem shows how ordinary experience can become poetry, even when the shape of the experience on the page is a paragraph. In "Loading a Boar," the speaker has the realization that his experience ("it ain't worth it, nothing's going right and I'm feeling half dead and I haven't wrote a poem in ages and I'm ready to quit it all") is the stuff of poems. The speaker loads the boar, unloads the boar, gets bitten, "and I went in the house and got out my paper and pencils and started writing and found out John he was right." The incident tells a story--it is a narrative, and could be fiction or memoir, but the speaker and the poet call it a poem, so I guess it's a poem. David Lee's The Porcine Canticles (Copper Canyon, 1984) combines earthiness and lyricism in unusual ways, and certainly gets away from any prettified notions of poetry.

If you're curious about prose poems, check out the link to Poetry Foundation's glossary listing for prose poems (I called the link 156 Prose Poems in my Favorite Links list). There are a wide variety of poets and poems there: poems by Pulitzer finalist Rae Armantrout and Pulizter winner Keith Waldrop; Carolyn Forche's much anthologized "The Colonel" is there, as well as Frank O'Hara's "Meditations in an Emergency."

I'll close with the final sentence of Campbell McGrath's "The Prose Poem": "You've passed this way yourself many times, and can tell me, if you would, do the formal fields end where the valley begins, or does everything that surrounds us emerge from its embrace?"

What do you think about prose poems? Are they a form or a medium? What's the difference between a sudden fiction and a prose poem? Or do you agree with Robert Frost, that poetry without formal limits is "like paying tennis without a net?'
Posted by bibliophiliac at 6:57 PM